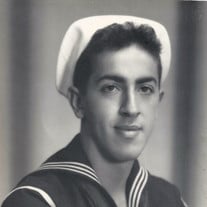 Albert L. Scapellati, age 90, of Kensington passed away on Friday, March 2nd at Jerome Home in New Britain. Born in New Britain on July 6, 1927, he was the son of the late Anthony and Rose (Arata) Scapellati. A graduate of New Britain High School, at age 17 he received his parents' permission to join the Navy joining his brother Salvatore in service to our country. As a WWII Seabee, Albert was sent to the Bikini Islands in the South Pacific to prepare the island and lagoon for the atomic bomb testing. Returning to New Britain at the end of the war, he attended Teachers College of CT for a year before taking a job with the American Hardware Company, later renamed Emhart, He retired after 39 years there when he was elected Tax Collector for the Town of Berlin. After 6 years in that position he briefly tried retirement only to take a position with the State Dept. of Revenue Services for 4 more years until finally retiring. Albert was very proud of the many opportunities he had during his life including; his service as Deacon and Senior Deacon for South Congregational Church; being a charter member of the local VFW #10732; serving as Chairman of the Berlin Republican Town Committee and his involvement with the committee which established the charter that changed Berlin's town government to its present form. He also served many years as a Justice of the Peace, performing numerous marriage ceremonies, the highlight of which were for his son Gary and for both his grandchildren. He is survived by his 2 sons Gary Scapellati of Huntington Beach CA, Mark Scapellati and his wife Lynette of New Britain, his 2 special grandchildren and 2 great-grandchildren, Matthew and his wife Anastazia Scapellati and their daughter Amelia of Burlington, Laura (Scapellati) Delgado and her husband Ryan of New Britain and their son Reese. Albert was predeceased by his loving wife Esther (Sayles) in 2014.,his brother Salvatore Scapellati, his sisters Frances Murphy and Anita Morgen, and his grandson Nicholas Scapellati. Services will be Tuesday, March 6th at Rose Hill Funeral Home, 580 Elm St. Rocky Hill CT with a viewing at 10 AM with funeral service at 11 AM. Burial immediately following. In lieu of flowers, Albert requests that donations may be made to South Congregational/First Baptist Church, 90 Main St. New Britain CT 06051.

Albert L. Scapellati, age 90, of Kensington passed away on Friday, March 2nd at Jerome Home in New Britain. Born in New Britain on July 6, 1927, he was the son of the late Anthony and Rose (Arata) Scapellati. A graduate of New Britain High... View Obituary & Service Information

The family of Albert Louis Scapellati created this Life Tributes page to make it easy to share your memories.

Albert L. Scapellati, age 90, of Kensington passed away on Friday,...

Send flowers to the Scapellati family.