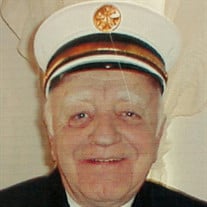 Alexander Joseph Brilliant Jr., 79, formerly of Rocky Hill, died Saturday, January 21, 2017, to be reunited with his wife of 52 years, Mary (Pease) Brilliant. Alexander was born in Hartford, CT on February 27, 1937, the son of the late Alexander and Angela Brilliant. He grew up in Rocky Hill and was a lifelong resident. He attended Wethersfield High and graduated from the University of Hartford with a degree in business administration. He was honorably discharged from the Air Force after four years of service. Al was a member of the National Association of Purchasing Management and the CT Association of Purchasing Managers. He worked at Bassick, Stanley Works and New Britain General Hospital as a Purchasing Manager. An advocate for quality education, he was Vice Chairman of the Board of Education in Rocky Hill. He was a lifelong member of the Rocky Hill Fire Department, retiring as a full time Fire Marshal. Focusing on fire safety, prevention and education, “If one life was saved, it was worth it”. During his retirement, he enjoyed spending time with his family and watching UCONN basketball with his wife. They enjoyed their time at Nelson’s family campground for nearly 45 years. Alexander is survived by his three daughters and their husbands; Cynthia and Glenn Bartkowski of Manchester, Lynn and Robert DeYoung Jr of Ellington, and Lisa and Douglas Alexander of Avon; grandchildren Michelle, Benjamin, Molly, Parker and Audrey. He also leaves behind his siblings, Joyce Jacobs of Atlanta, GA and Jeanne Brilliant of Newington, his nieces, Denise and Judy of Atlanta, GA and long time friends, Kent Hammerlind, Bruce, Glenn and Michelle Gustine. Family and friends are invited to gather on Monday, January 30th from 4-7pm at the Rose Hill Funeral Home, 580 Elm St., Rocky Hill, CT. Burial will be private. In lieu of flowers, donations can be made to the Rocky Hill Volunteer Fire Dept.

Alexander Joseph Brilliant Jr., 79, formerly of Rocky Hill, died Saturday, January 21, 2017, to be reunited with his wife of 52 years, Mary (Pease) Brilliant. Alexander was born in Hartford, CT on February 27, 1937, the son of the late... View Obituary & Service Information

The family of Alexander Joseph Brilliant Jr created this Life Tributes page to make it easy to share your memories.

Send flowers to the Brilliant family.