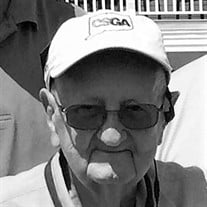 Allan E. Acker, 89 of Rocky Hill and formerly of Wethersfield, passed away Monday, January 18, 2016 at UCONN Health Center. Married for 64 years, he was predeceased by his beloved wife, Shirley B. Acker. Allan served in the United States Army, Pacific Air Service Command. He was owner and operator of Acker’s Radio & Television Inc. in Wethersfield for 43 years. In addition, he was an active long term member of the Masonic organization. A 33° masonic brother, Allan was a member of Hospitality Lodge #128, the Shriners, and the York Rite. He also served as Trustee and is a past Sovereign Prince of the Red Cross of Constantine; Trustee and Treasurer-emeritus of the Valley of Hartford Scottish Rite and Trustee and Treasurer of the Scottish Rite Foundation. A longtime member of Wethersfield Country Club, he became involved with the Connecticut State Golf Association in 1993. He was passionate in his volunteer work at tournaments and serving as a rules official; and for the past 16 years, Allan was responsible for organizing and managing the One-Day Tournament Program. In 2007 he received the CSGA’s Distinguished Service Award. A devoted and loving father, Allan leaves behind seven children and their spouses: Christine Neligon and husband William of Glastonbury, Michael Acker and wife Donna of Manchester, Elizabeth Boulanger and husband Gregory of Southington, Margaret Acker-Blardo and husband Jesse of Rocky Hill, Thomas Acker and wife Lisa of St. Louis, MO, Andrew Acker and wife Martha of St. Louis, MO, and Matthew Acker and wife Susan of Manchester. He also leaves 16 grandchildren and 12 great grandchildren. The family would like to extend a heartfelt thank you to the staff of UCONN Health Center and ICU team for the extraordinary care and support provided. Calling hours are scheduled for Monday, January 25, 2016 from 3:00 pm – 6:00 pm at Rose Hill Funeral Home, Elm Street, Rocky Hill. Funeral services are private and at the convenience of the family. In lieu of flowers, contributions may be made in Allan’s name to a charity of the donor’s choice.

Allan E. Acker, 89 of Rocky Hill and formerly of Wethersfield, passed away Monday, January 18, 2016 at UCONN Health Center. Married for 64 years, he was predeceased by his beloved wife, Shirley B. Acker. Allan served in the United States Army,... View Obituary & Service Information

The family of Allan Edwin Acker created this Life Tributes page to make it easy to share your memories.

Allan E. Acker, 89 of Rocky Hill and formerly of Wethersfield,...

Send flowers to the Acker family.