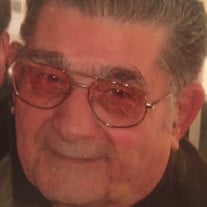 Americo J. Tancredi, “Mike,” passed away on June 26th, 2019. He was born in Philadelphia, PA to parents Martino Tancredi and Clementina (Cancelmo) Tancredi, both immigrants from Italy. He was predeceased by brothers, John, Joseph, and Salvatore, and sister, Mary Christinzio. He was also predeceased by his wife of 60 years, Paula “Polly” (Colbert) Tancredi, whom he missed every day since her death ten years ago, and their first great grandchild, Anthony. Mike leaves two children, Judy Tancredi and Gary Tancredi and wife, Susan; grandchildren, Dustin Taksar, Alison DiFlorio and husband Tony, Sarah Manemeit and husband Jesse, and Amanda Tancredi; a grandson born just a week before his death, and a first great granddaughter due in several weeks. Mike loved his family and enjoyed being “Poppi”. Mike was an Army veteran enlisting at age 18, and was affiliated with Hannon Hatch VFW Post #9929. He served in many capacities but was most proud to be State Commander from 1972-1973. Mike retired from Hartford Boiler Works after 40+ years of employment. Not content to stay at home all day he became a greeter at Southington’s Walmart, a job he enjoyed as it suited his friendly nature. He worked there into his late 80’s. He enjoyed his many friends in the Jensen’s Community and served as Treasurer for their Activity Club. He also enjoyed playing pool in the clubhouse “with the guys.” If there was a holiday party and dinner he was sure to be there enjoying food and good company. Mike was a member of Our Lady of Mercy Church in Plainville. He was a kind, honest, friendly, loving guy who in return was loved by his family and many friends throughout his life. There will be calling hours on Wednesday July 3rd from 11am-12pm at Rose Hill Funeral Home in Rocky Hill, CT. Funeral service will begin at 12pm at Rose Hill Funeral Home followed by burial in the Middletown Veterans Cemetery on Bow Lane in Middletown, CT. In lieu of flowers, the family requests that you make a donation to your place of worship or favorite charity in his name.

Americo J. Tancredi, &#8220;Mike,&#8221; passed away on June 26th, 2019. He was born in Philadelphia, PA to parents Martino Tancredi and Clementina (Cancelmo) Tancredi, both immigrants from Italy. He was predeceased by brothers, John, Joseph,... View Obituary & Service Information

The family of Americo John Tancredi created this Life Tributes page to make it easy to share your memories.

Send flowers to the Tancredi family.