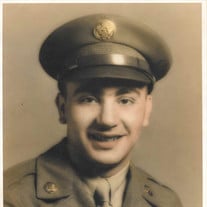 Amerigo "Blackie" Sanzo, 85, of Hartford and Windsor passed away on November 19, 2015. Amerigo was born in Harford on September 28, 1930, the son of Lorenzo and Mary (Santacroce) Sanzo. Amerigo grew up on Bond Street in the South End of Hartford. He attended Bulkeley High School, where he left to begin working to support his mother and siblings. Amerigo worked for Jacobs Manufacturing and the Hartford Box Company. He retired in 2001 and moved to Windsor to be closer to family. Amerigo was drafted into service by the Army, and proudly served from 1952 to 1954. Amerigo loved to watch all sports, and was especially fond of UCONN basketball and the Red Sox. He was an avid reader of the Hartford Courant and could be counted on to recap sports, weather forecasts, and current events. He was predeceased by eight brothers, Joseph, John, Antonio, Frank, Victor, Michael, Nicola, and William Sanzo, a sister Mary Sanzo, and his brother-in-law Gilbert Andersen. He is survived by his sister Edith Andersen of Windsor, and two brothers, Lawrence Sanzo of Windsor, and Umberto Sanzo of Bellevue, Nebraska. He also leaves behind many nieces and nephews, including his three beloved nieces Sandra and Lisa Andersen, and Linda Dillon, his nephew Michael Andersen and his wife Kristine, his great-nephew Nicholas Dillon, and great-nieces Jessica Dillon, and Emily and Charlotte Andersen, all of Windsor. The family would like to thank the nursing staff at Parkway Pavilion in Enfield for the compassionate and loving care provided to Amerigo. Family and friends may call at the Rose Hill Funeral Home, 580 Elm Street, Rocky Hill, on Tuesday, November 24, 2015, at 10am followed by Funeral Services in the funeral home at 11am. Burial with Military Honors will be in Rose Hill Memorial Park. In lieu of flowers, memorial contributions may be made to St. Joseph Church, Social Action Committee, P.O. Box 253, Poquonock, CT 06064.

Amerigo "Blackie" Sanzo, 85, of Hartford and Windsor passed away on November 19, 2015. Amerigo was born in Harford on September 28, 1930, the son of Lorenzo and Mary (Santacroce) Sanzo. Amerigo grew up on Bond Street in the South End of Hartford.... View Obituary & Service Information

The family of Amerigo Sanzo created this Life Tributes page to make it easy to share your memories.

Amerigo &quot;Blackie&quot; Sanzo, 85, of Hartford and Windsor passed away...

Send flowers to the Sanzo family.