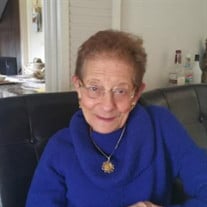 Anna (Albano) DeLeo, 82, beloved mother of her family fell asleep in death on Tuesday, October 26th, 2021 at Saint Francis Hospital. She was born in Bracigliano (Salerno) Italy, the daughter of Giuseppe and Alfonsina (Basile) Albano. She immigrated to the United States as a young girl. She worked as a Seamstress until she met the love of her life, John M. DeLeo. They were married in 1959 and initially settled in Hartford. Soon after, they started their family, Anna quit her job to focus on raising her three children. In the seventies, they moved to their current homestead in Wethersfield. When her children were mature enough, she sought employment at the former Sage-Allen store in Wethersfield, where she worked in the Ladies Apparel department. She enjoyed the job immensely, as she loved dealing with the public and outfitting women in fine clothing. It was a source of joy for her. She eventually retired from Sage-Allen to assist in the family business, A.D.’s Pizzeria in Windsor Locks. She became locally famous for her delicious pizzelles which were always a big hit. In 2019, she retired from the pizzeria after a long career and was missed by many of the local clientele. Even after retirement, she continued making those pizzelles at home to satisfy her former customers. Anna was predeceased by her loving husband John in 1997. She leaves behind her son, Franco DeLeo; two daughters and sons-in-law, Felicia and Mitchell North, Alfonsina and Raffaele Aliberti; and her two sisters, Giovanna Aliberti and Francesca Ferrara, both of Bracigliano. Also missing her are her five grandchildren, John Franco DeLeo, Justin DeLeo, Anna DeLeo, Maria Aliberti, and Fulvio Aliberti; four nieces and nephews, Giuseppe Aliberti, Cristoforo Aliberti, Luigi Ferrara, and Raffaella Palmieri, all of Bracigliano, as well as several other relatives and close friends. Family and friends are invited to call on Tuesday (November 2, 2021) from 5 to 7 PM at the Rose Hill Funeral Home, 580 Elm St. Rocky Hill. A Graveside service will be on Wednesday (November 3, 2021) at 10 AM in the Rose Hill Memorial Park, Rocky Hill. In lieu of flowers, donations can be made to the Connecticut Epilepsy Advocate, Inc., on-line at www.ct-ea.org or 20 Salem Walk, Milford, CT 06460-7132.

The family of Anna DeLeo created this Life Tributes page to make it easy to share your memories.

Send flowers to the DeLeo family.