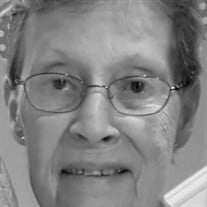 Barbara Elizabeth (Penfield) Lewis, age 83, of Colchester, CT, passed away peacefully at home on January 26, 2021 after a period of declining health and dementia. Barbara was a life-long Connecticut resident having been born in Hartford and raised in West Hartford, before marrying and moving to East Hartford where she lived for many years with her husband and three boys. Upon the passing of her husband, Dick, she moved to Colchester, CT where she lived with her son Tim and his family for the last 20-years. Barbara worked for many years in the East Hartford School System and spent most of her time as the School Secretary at the Robert J. O’Brien Elementary School. She so enjoyed her time with the kids and often spoken of them in her retirement. Barbara was a talented craft painter and spent many hours painting and decorating wooden shapes that her husband Dick had cut and shaped as part of their craft business. In her retirement years Barbara took a mission trip to Honduras with her faith family at Faith Lutheran Church in East Hartford; and travelled to Ireland, Italy and China. Oh, how she fretted over having to drive on the highway, yet she travelled across the globe and never thought twice about it! She and her husband were life-long fans of the UCONN Huskies women’s basketball team and were always standing on the sidelines or sitting in the bleachers of their sons and grandchildren’s sporting events. Barbara leaves behind her son Gerry and his wife Ellen of Windham, NH; Daughter in-law Margaret Lewis of Colchester, CT; grandchildren Michael Lewis and his wife Lauren of Monrovia, MD; Kristen Lewis of Windham, NH (who lived with and helped care for Grandma over the last year); Jacob and Teagan Lewis both of Colchester, CT; great-grandchildren Zoe, Riley and ‘baby’ Lewis of MD; she also leaves behind a nephew, Jeffrey Calkins, of Port Charlotte, FL. Barbara was predeceased by her parents, Stephen and Edythe Penfield; a sister, Janet Calkins; her husband, Dick Lewis; and two sons, Rick and Tim Lewis. Burial will be private and at the convenience of the family at Rose Hill Memorial Park. Rose Hill Funeral Home are handling the arrangements. In lieu of flowers or gifts, Barbara’s family asks that donations be made in her name to the Alzheimer’s Association through their web page located at www.Alz.org.

Barbara Elizabeth (Penfield) Lewis, age 83, of Colchester, CT, passed away peacefully at home on January 26, 2021 after a period of declining health and dementia. Barbara was a life-long Connecticut resident having been born in Hartford and... View Obituary & Service Information

The family of Barbara Lewis created this Life Tributes page to make it easy to share your memories.

Send flowers to the Lewis family.