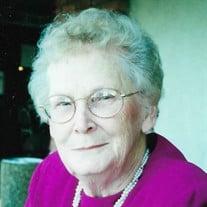 Beatrice Mary (Molumphy) Moors, passed away peacefully on June 20, 2021. She was the beloved wife of the late Harry L. Moors, Jr. Born in Hartford on Aug. 16, 1919, she was the daughter of the late John T. Molumphy and Alice Burroughs Molumphy. She was a long-time resident of Wethersfield and a parishioner of St. Andrews Episcopal Church in Rocky Hill. She enjoyed traveling, and visited Hawaii, England, Ireland, France, Germany, Austria, Switzerland and Holland, as well as much of the United States. She retired from Travelers Ins. Co. after 20 years in 1985. She belonged to a morning bowling league well into her 90’s. More than anything, she was a loving mother, grandmother and great-grandmother who will be forever missed by her five children: Jerry Moors and wife Shirlee of Vista, CA, Judith Forte and husband Anthony of Wethersfield, Virginia Day of Suffield, Raymond Moors and wife Kim of Charlotte, NC, and Margaret Settino and husband Stephen of Old Orchard Beach, ME.; 10 adored grandchildren, Cathy (Marcum) Wilkes, Debbie (Dennis) Cushman, Elizabeth Ann (Gary) Vienna, Liz (Michael) Irace, Tony (Kristen) Forte, Michael Brown, Jennifer (Troy) Arnette, Charlie Moors, Christine (Nicholas) Gherard and Bridget (Stephen) Swift, 19 cherished great grandchildren, Joshua and Aaron Wilkes, Natalie and Brian Cushman, Ajay and Kacy Vienna, Zachary and Monica Forte, Ryan Green, Samuel Arnette, Nicholas, Jack and Sean Gherard, Kristi (Chris) White, Daniel, Kaitlyn and Michael Irace, Jordan and Rayvn McKinley, and 3 great-great-grandchildren, Dylan White, Jace and Autumn Green. She was predeceased by 6 sisters and brothers. We want to express our deepest thanks to the staff of Marlborough Health and Rehab for their devoted care of her during the last ten months. There will be no calling hours. Rose Hill Funeral Home has care of arrangements. Please share online expressions of sympathy, memories or photo tributes at www.rosehillfuneralhomes.com. A memorial service will be held at St. Andrew’s Episcopal Church in Rocky Hill on Friday, June 25 at 1:00 PM. In lieu of flowers, donations in Bea’s memory may be made to the American Cancer Society or the Salvation Army.

Beatrice Mary (Molumphy) Moors, passed away peacefully on June 20, 2021. She was the beloved wife of the late Harry L. Moors, Jr. Born in Hartford on Aug. 16, 1919, she was the daughter of the late John T. Molumphy and Alice Burroughs Molumphy.... View Obituary & Service Information

The family of Beatrice M. Moors created this Life Tributes page to make it easy to share your memories.

Send flowers to the Moors family.