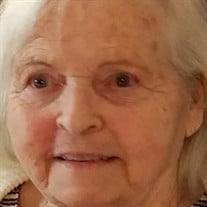 Beatrice “Bea” Rines, age 94, of Danbury, CT, passed away on July 30, 2020 at Maplewood of Danbury. Bea was born in Maine on September 27, 1925. She married her high school sweetheart, Clifton L. Rines in 1945 after he returned from serving in the Navy in WWII. They came to Connecticut with their two children in 1950 and settled in Manchester. Bea held several positions in her working and volunteer life but she talked most about driving school bus for Manchester Public Schools and being a Girl Scout leader. Her son, PFC Everett Rines, was killed in Vietnam in April 1970. Cliff and Bea loved camping and traveling and, when he retired they moved to Beaufort, South Carolina where they lived until his death in 1993. Bea returned to Connecticut a year later to be closer to family. She became an active member and volunteer for the Widows and Widowers group at the Danbury Senior Center. She led that group for several years and still talked about the activities and outings she planned for them and how satisfying it was to take a small group to Bethel Health Care to visit residents in the nursing home each month. She loved to play her piano and complete large crossword puzzles. Bea is survived by her daughter Pamela and husband Paul; her grandchildren, Stephen and his wife Tracee, Gerald, Michael and his wife Jennifer; and four great-grandchildren, Alexander, Everett, Joseph Paul “JP”, and Katherine. Due to the continued precautions concerning COVID-19, there will be no calling hours. A graveside funeral service and internment will take place at Rose Hill Memorial Park next to Rose Hill Funeral Home, 580 Elm Street, Rocky Hill, CT. on Tuesday, August 4, 2020 at 1 pm.

The family of Beatrice “Bea” Rines created this Life Tributes page to make it easy to share your memories.

Send flowers to the Rines family.