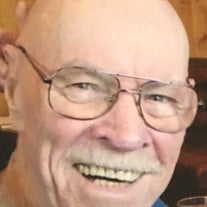 Chalmers Vincent (Vinny) Morrell, 85, passed away at home on Monday, after a long battle with cancer. He was the son of the late Chalmers V. and Olive (Akerson) Morrell. Born in Caribou, Maine, he lived in Newington most of his life, having graduated from the Newington schools before enlisting in the Navy and serving his tour of duty in the South Pacific, honored as a Korean War veteran. Two weeks ago, Vinny was predeceased by his wife of 62 years, Elsie J. (Gherlone) Marino. He leaves his son Charles and his wife Margaret, residents of Portland; his daughter Colleen Roberts and her husband Neil, residents of New Britain. In addition, he leaves his grandson (and wonderful caregiver) Kyle Roberts; as well as Daniel Steele and his two great-grandsons Danny and Damian; plus several nieces and nephews. He was also predeceased by his grandson Woody and his siblings, brother Ernest, sister Ernestine Milne, and brother Reginald. He was a tool & die maker for 30 years before retiring from Stanley Works in New Britain. Vinny was previously employed by Pratt & Whitney Aircraft of East Hartford. He also taught evening classes at E.C. Goodwin Tech. in New Britain, in the 1960es. Vinny enjoyed motorcycling, motorhomes, travel, and of course, his family and vast number of friends. After retiring from Stanley Works, he and Elsie enjoyed boating, motorcycling (coast to coast), motorhome camping, in addition to their Vermont abode and snowmobiling, as well as his use of his mechanical skills tinkering with his many vehicles over the years. He was an active retired member of the Newington Volunteer Fire Dept., as well as a retired supernumerary Newington Police officer. As an active member of the Blue Knights International he leaves many friendships from coast-to-coast, including the Royal Mounties in Canada and Nova Scotia. He was also a long standing member of the Masons, Sequin-Level Lodge 140 of Newington, and a Shriner with the Sphinx Temple, along with the VFW and the American Legion. Family and friends are invited to call at the Rose Hill Funeral Home 580 Elm St. Rocky Hill on Friday (August 19, 2016) from 4 to 7 PM. Funeral service and burial with military honors will be held at the convenience of the family in Rose Hill Memorial Park, Rocky Hill. In lieu of flowers donations may be made to Hartford HealthCare Hospice 1290 Silas Deane Hwy. Wethersfield, CT. 06109 or to a charity of the donor’s choice.

Chalmers Vincent (Vinny) Morrell, 85, passed away at home on Monday, after a long battle with cancer. He was the son of the late Chalmers V. and Olive (Akerson) Morrell. Born in Caribou, Maine, he lived in Newington most of his life, having... View Obituary & Service Information

The family of Chalmers Vincent Morrell created this Life Tributes page to make it easy to share your memories.

Chalmers Vincent (Vinny) Morrell, 85, passed away at home on...

Send flowers to the Morrell family.