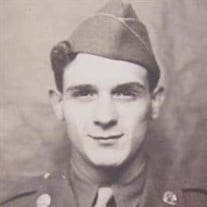 Charles John Zarbo, died November 15, 2019. Charlie was born in Ansonia, CT on April 14, 1921 to Mary (Piccolo) and Angelo Zarbo. Charlie was a World War II veteran of the Anti-Tank Company 313th Infantry Regiment, which saw action from Normandy to Central Europe in 1944-5. After the war, he returned home to New Haven, married Marjorie Bentley, and went to work for Security Insurance Company, where he stayed for his entire career, retiring in the mid-1980s. When Security moved to Hartford in the mid-1960s, Charlie and Marge relocated to Southington, CT, where they lived until after Marge died in 1988. Charlie was a proud member, and later Major, of the Second Company Governor’s Horse Guard for fifty years. He loved going to the headquarters on Sundays to drill and spend time with the horses. He especially enjoyed having the opportunity to ride in several Presidential inaugural parades, including that of Ronald Reagan, who Charlie admired as a fellow horseman. Even after retiring from the Horse Guard, he went to cook for the members after Sunday drills, and during summer camp weeks in Niantic. In his retirement, well into his early 90s, Charlie could be relied on to help family and friends with gardening, house painting, driveway sealing, and many other tasks. He was a wonderful dancer, a firm believer in the power of staying active and engaged, and was a great example of how to age well. Charlie is survived by his son, Lawrence (Susan) Zarbo of Rocky Hill, CT, and his daughter Suzanne (William) Kannenberg of Weare, NH. His older son, Charles A. Zarbo, pre-deceased him in 2015. He is also survived by five grandchildren: Jessica (Aaron) Brox of Greenville, NH; Sara (Shawn) Morrison of West Hartford, CT; Andrew (Catherine) Zarbo of Dover, NH; Lauren (Joseph) Getts of Manchester, NH; and Adam Kannenberg of Concord, NH, along with three great-grandchildren. He also leaves behind three siblings: Christine Sgro of North Haven, CT; Rose (Leon) Bellio of Leominster, MA; and James (Geraldine) Zarbo of Laurel, MD, along with a sister-in-law, Joan Zibluk, of Bethany, CT, and numerous nieces and nephews. His brother, Joseph Zarbo, and sister, Anna Cosenza, pre-deceased him. The family would also like to acknowledge Charlie’s long-time dear friend, Margaret Reilly, of North Haven, CT, and to thank the staff of the Memory Care unit of The Hearth at Glastonbury for their care of Charlie this last year. A funeral service will be held on Saturday, November 23, 2019 at 12 Noon at the Rose Hill Funeral Home, 580 Elm St., Rocky Hill. Family and friends may gather from 10-12 noon just prior to the service. Burial will be at the convenience of the family at St. Lawrence Cemetery in West Haven, CT. In lieu of flowers, the family invites donations in Charlie’s memory to Friends of the Second Company Governor’s Horse Guard, 4 Wildlife Drive, Newtown, CT 06470. Please share online condolences, memories or photo tributes at www.rosehillfuneralhomes.com.

The family of Charles John Zarbo created this Life Tributes page to make it easy to share your memories.

Send flowers to the Zarbo family.