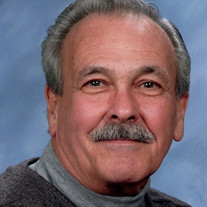 Clifford W Burkhart Jr. 88, of Waterbury, CT entered the gates of Heaven on Friday October 8, 2021 with his loving family by his side. Born November 7, 1932 in New Rochelle, NY he was the son of the late Clifford Sr. and Juanita (Johnson) Burkhart. He leaves behind to cherish his memory his beautiful and loving wife Dolores “Dee” (DiMaria) Santalucia-Burkhart. He was predeceased by Julia Chakalos, the mother of his sons, Stephen of Meriden, CT and David and his wife Donna of Hudson, MA. He was the widower of Donna Dougherty leaving behind their adoring daughter Toni Alves and her husband Dan of Naugatuck, CT; as well as Dolores’s daughter Marian (Santalucia) Boisvert of Plantsville, CT whom he loved as his own. He will be greatly missed by all of his grandchildren and great grandchildren: Mellissa & Ryan Bates and their children Luna and Lillian of Rutland, MA; Julia, Dustin and Dalton Burkhart of Hudson; Alana, Alexei and Alivia Alves of Naugatuck; Thomas and Erica Boisvert and their children Logan and Lucas of Prospect, CT; Christina Boisvert of New Haven, CT; Sara and Leo Soares and their children Alexander and Elizabeth of Prospect; and Conner Boisvert of Plantsville, along with many nieces, nephews and friends. He was predeceased by two sisters, Juanita Porter and Barbara Hair. Cliff grew up in Middletown, CT graduating from Woodrow Wilson High School Class of 1951, and then went on to serve in the U.S. Navy during the Korean War. Upon return he continued his education at the University of Hartford attaining his Bachelor’s Degree in Business Administration in 1964. He was a long-time resident of Longmeadow, MA and worked as a sales executive for the Servus Rubber Company before moving back to Middletown where he was a real estate agent and developer. He was a member of Grace Lutheran Church and a jack-of-all-trades, dedicating his time and talent working on numerous projects including the addition of the preschool building. In retirement he enjoyed planting Christmas trees and spending time outdoors on the family wood lot. He was also an avid Patriot’s fan and was a member of the Moose Club and the Polish Falcons Nest 519. Calling hours will be on Monday October 18th from 6:00-8:00pm at the Rose Hill Funeral Home 580 Elm St. Rocky Hill, CT. A Memorial Service will be held on Tuesday October 19th at 10:00 at Grace Lutheran Church 1055 Randolph Rd. Middletown, with reception immediately following in the church hall. Interment will follow at 2:00pm at the Rose Hill Memorial Park. In lieu of flowers, donations may be made in Cliff’s memory to the Wounded Warrior Project. (www.woundedwarriorproject.org). Please share online expressions of sympathy at www.rosehillfuneralhomes.com.

Clifford W Burkhart Jr. 88, of Waterbury, CT entered the gates of Heaven on Friday October 8, 2021 with his loving family by his side. Born November 7, 1932 in New Rochelle, NY he was the son of the late Clifford Sr. and Juanita (Johnson) Burkhart.... View Obituary & Service Information

The family of Clifford Burkhart created this Life Tributes page to make it easy to share your memories.

Send flowers to the Burkhart family.