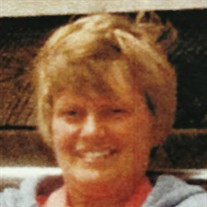 Cynthia Louise Rec “Lou Hoo” 72, passed away on January 4, 2017 after a courageous and noble battle with multiple myeloma cancer. She was born on June 19, 1944 in Holyoke, Ma. She spent her summers as a young girl at the Polish Camp on a nearby lake. Her family moved to Cromwell, CT in 1958, where she graduated from Cromwell High School. Her first real job as a teenager was with the Jansak family at their luncheonette on Route 72 in Cromwell, where she helped serve the customers. After high school, Cindy worked at Pratt & Whitney and was a very valued part of the baseball team of women from Pratt. After a varied career, Cindy was the first woman to be hired by Stanley Works as a repair machinist. Cindy was the only woman in the State or at Stanley to hold and succeed in this position. Cindy retired from Stanley Works in New Britain in February 2001. Cindy was predeceased by her Father, Stanley Rec, her Mother, Teofila Rec and her brother Lawrence Rec. She leaves her sister-in-law, Linda Rec, her nephews, Jonathan Rec and Christopher Rec. She also leaves a great nephew, Joshua Rec and his mother, Cindy Atwater, many cousins, lifelong friends and her kitty, Roxy. Cindy was a member of the Third Congregational Church in Middletown. She was also a member of the Ladies Aid Society. Cindy was a member of the Lions Club in Colchester. Cindy moved to her gorgeous new home in Middletown, that was called Laurel Ledge, where she built an apartment in the lower level for her Mother and a beautiful deck around the pool in the back yard. Added to her talents, Cindy knit, sewed and loved to garden, care for her many cats and dogs and had a passion for romantic mystery novels. Cindy owned many travel vehicles starting with a pop up and finally a 35 foot motor home. She traveled all over the United States and took friends with her. On Cindy’s frequent trips cross country, she fell in love with the Indian culture. She brought back beautiful artifacts of Indian nature. She loved sports, the Women’s Basketball team at UCONN, board games and playing Aquire and Hand and Foot cards with her closest friends. She will be lovingly remembered in a memorial service on February 4, 2017 at 11:00 a.m. at the Third Congregational Church on Miner Street in Middletown. In lieu of flowers, Cindy has requested that you make a donation to The Third Congregational Church and The Multiple Myeloma Cancer Fund.

The family of Cynthia Louise Rec created this Life Tributes page to make it easy to share your memories.

Send flowers to the Rec family.