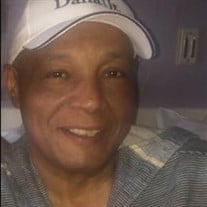 Dana G. Reaves SR. , age 63, born on March 11, 1954, in Hartford, Ct, son of Wilbur and Beverly Reaves, died peacefully on Tuesday March 21, 2017 with his family by his side, after a long courageous battle with cancer. Dana grew up in greater Hartford and devoted his life to serving his community. He was owner and operator of Integrated Employer Solutions, where he made a significant impact when it came to providing quality service for his clientele. He was all about building relationships which made him a self proclaimed leading advocate for encouraging business to thrive in the city of Hartford. He was quoted saying,"success lies in building bridges and staying connected." Over the years Dana sat on various boards, in particular the Spanish American Merchant Association, which he held close to his heart. In 2016 Dana was proudly inducted into the Hall of Fame at the Boys and Girls Club of Hartford. This was the culmination of his love for all sports and creating relationships. His infatuation for the game of basketball began at a young age and was a staple throughout his life. Dana was a HUGE New York Giants fan and he developed a passion for the game of golf, where he created lasting business and personal friendships. Dana had a heart of gold and knew that the true value of family and friendships lied in unconditional love. He had a contagious smile that spoke volumes and resinated his beauty within! Dana was preceded in death by his father, Wilbur Reaves and his beloved son Dana G. Reaves Jr. Dana is survived by the "love of his life", Cynthia Reaves, their two sons, David Reaves and his wife Lauren and their daughter Scarlett Baskerville of Newington, Ct. and Joshua Reaves of New Britain, Ct. His daughter Malaika Briles and her husband Jason and their 3 children, Maxwell, Alexandra, and Jacoby of Tigard, Oregon. Dana G. Reaves lll and Dana the third's mother Patricia Smith. He also leaves behind his grieving Mother, Beverly Reaves who truly had a special bond with her child. His brother Ronald Reaves and sister Renee Reaves. In addition to his adoring neices and nephews, Dana leaves behind a host of amazing relatives and friends. Lest we not overlook his broken hearted, devoted companion Brooklyn, the dog that was always by his side. Calling hours will be held Sunday April 2 from 2:00PM to 4:00 PM at the Rose Hill Funeral Home 580 Elm Street Rocky Hill, CT. With a brief memorial service in memory of Dana. In lieu of flowers, charitable donations may be made in Dana's name to the Boys and Girls club of Hartford. For online expressions of sympathy, go to www.rosehillfuneralhomes.com

Dana G. Reaves SR. , age 63, born on March 11, 1954, in Hartford, Ct, son of Wilbur and Beverly Reaves, died peacefully on Tuesday March 21, 2017 with his family by his side, after a long courageous battle with cancer. Dana grew up in greater... View Obituary & Service Information

The family of Dana Glenn Reaves Sr. created this Life Tributes page to make it easy to share your memories.

Send flowers to the Reaves family.