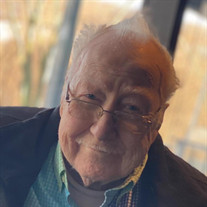 David Petrie Gove passed away unexpectedly on July 27th, 2021. David was born in Bridgeport, CT. He was the son of Dorothy (Jordan) Gove and Douglas Gove. He was predeceased by his wife Julia Gove in 2020 and his brother Paul many years before. David attended local Hartford Schools and then later on enlisted in the army where he served in World War II. At 26 he got a job working at Heublein for 36 years until retirement as a rectifier. David was known to many as Vegas or Pa. He loved telling stories especially while sitting in his big comfy recliner. As he got older his stories of “back in the day” became the main part of his life. Friends loved hearing them no matter how many times he told them. He was a guy that made people laugh including himself. The picture of him banging his foot to the floor when laughing at himself was priceless. In his old age he didn’t let it get him down, he loved going out to places. He especially loved going out to breweries and his favorite place, the Ferry Snack Shack in Rocky Hill with his longtime friend who he considered as another son Todd “Cuz”. He would sit there for hours watching the boats and sneaking beer that Todd would bring in his SUV. David had three kids, Glenn, Gary, & Susan. He was a great dad. He was always there for his kids growing up doing the smallest but most important things such as showing up after work to watch his sons play their baseball games or his daughter shooting hoops at the neighborhood park. In his old age, he depended on his kids to help him when needed just like when they were young. David also loved his grandchildren Devyn, Demorís, and Brodey. He loved having them around as much as possible and vice-versa. His grandkids adored him and found anytime possible to visit. His granddaughter Demoris also moved in with him to help him with his needs. David didn’t know what he would do without his “Demí”. The memories are unforgettable. Last but not least, he didn’t want to forget his animals. He was an avid donator to the ASPCA and Humane Society. David leaves behind his son Glenn Gove of Wethersfield, Gary and Yris Gove of Wethersfield, Susan and Scott Coutant of Malborough, and grandchildren Devyn, Demorís, and Brodey Coutant of Marlborough. There will be a calling hour from 10am-11am with a service starting at 11am on Tuesday August 3rd at Rose Hill Funeral Home 580 Elm St. Rocky Hill, CT. Burial will immediately follow. Please share any online condolences, memories, or photo tributes at Rosehillfuneralhomes.com

David Petrie Gove passed away unexpectedly on July 27th, 2021. David was born in Bridgeport, CT. He was the son of Dorothy (Jordan) Gove and Douglas Gove. He was predeceased by his wife Julia Gove in 2020 and his brother Paul many years before.... View Obituary & Service Information

The family of David Gove created this Life Tributes page to make it easy to share your memories.

Send flowers to the Gove family.