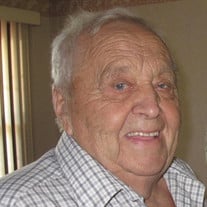 Delphis “Del” Roland Bouchard, 93, of Rocky Hill, CT passed away peacefully after a brief illness on December 13, 2017 in Hartford, CT. Del was born on a dairy farm in Jay, Vermont to Joseph and Oglore (Moreau) Bouchard, the youngest son amongst his six siblings. His early years were filled with hard work on the farm, tapping trees for maple syrup, shoveling gravel for roads, and cutting ice blocks on the pond. He spent two years in the National Guard and traveled to Europe during the Korean Conflict. He returned to the US to settle in Connecticut not far from his two older brothers. He reunited with Rachel Fontaine, a girl he knew from Vermont, who also settled nearby. Soon they were married, a marriage that would span over 65 beautiful years together. In CT, Del worked at a paper mill, and was eventually employed by Fleming Oil where he apprenticed in the home heating oil business. In 1968, he and Rachel started their own company, Del’s Oil Service, which they successfully ran until their retirement in 1998. His company also sponsored a Little League team in town. However, retirement didn’t sit well with Del, who liked to be active. He found a part-time job driving local children, some with special needs, to and from school; it was a job that was immensely rewarding for both the driver and children involved. He earned multiple awards there, including Employee of the Year. Throughout his time in Rocky Hill, Del was involved with his church, St. James Roman Catholic Church, where he was a volunteer usher for decades, through his late 80s. Del and Rachel raised four children and treasured their trips back to Vermont, where they shared their very special stories about growing up during the Depression. Del never lost his love of the farm, and planted a huge vegetable garden wherever he lived, sharing the harvest with friends. After retirement from the school bus company, he took up a new hobby -- collecting and restoring vintage Wheelhorse lawn tractors which he rescued from trash heaps, re-tooled, restored, and painted to look like new. He sold nearly a dozen restored tractors just a few years ago. Delphis is survived by his beloved wife Rachel, his children Denise Kinkade, Michael Bouchard, Suzanne White and her husband Robert, and Andre Bouchard. He is also survived by his granddaughters Sarah and Amanda White, and his sister Aurora Morin in Troy, VT. He was predeceased by his granddaughter Teisha Skeene. Calling hours will be on Thursday, December 21, 2017 from 9:30-10:30 a.m. at Rose Hill Funeral Home, 580 Elm Street, followed by a mass of Christian burial at 11:00 a.m. at St. James Roman Catholic Church, 767 Elm Street. Both are located in Rocky Hill. Burial will follow at Rose Hill Memorial Park.

Delphis &#8220;Del&#8221; Roland Bouchard, 93, of Rocky Hill, CT passed away peacefully after a brief illness on December 13, 2017 in Hartford, CT. Del was born on a dairy farm in Jay, Vermont to Joseph and Oglore (Moreau) Bouchard, the youngest... View Obituary & Service Information

The family of Delphis R. Bouchard created this Life Tributes page to make it easy to share your memories.

Send flowers to the Bouchard family.