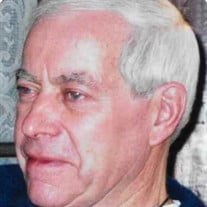 Donald Edwin Carlson, 90, of Kensington, passed away at his home on Sunday, April 29, 2018. Born in New Britain on March 22, 1928, he was the son of the late Gustave and Judith (Anderson) Carlson. He became a resident of Kensington in 1982 and remained there until his passing. He joined the Army in 1950 where after basic training, he was placed in a tank repair unit in Germany with a rank of Corporal. Within a short time, he showed his outstanding ability as an engineering mechanic which he achieved from working on old cars and motorcycles since he was 13 and working later in the local Ford dealer as a mechanic. He then was promoted to Staff Sergeant. He was highly appreciated by his commanding officers who knew nothing about mechanics and pleaded with him to stay in when his tour of duty was over. He came home and went on to become a master in auto body work and in a short time, opened “D&D Auto Body” with a partner in Kensington. This was only the beginning of his career as he then changed his interest to antique and vintage cars. He worked on and owned almost every American antique car that was ever produced. His friends would beg him to go with them on antique car tours around the country because only he could repair an antique car on the road. He had a wonderful side that was loving of animals and had dogs, cats, ducks, chickens for which all he had a story. Donald leaves behind his brother, Allan Carlson of Newington, nephews, Jeffrey A. Nelson and partner Terry, Terry Nelson and his wife Deborah, Greg Leonard and his wife Sue, Mark Carlson and his wife Elizabeth, nieces, Karen Irish and her husband Tom, Erika Douglas and husband Darren. He was predeceased by his brother, Clinton and two sisters, Linea and Ingrid. A funeral service will be held on Monday, May 7, at 11:00am at the Rose Hill Funeral Home, 580 Elm St., Rocky Hill. Burial will be private at the convenience of the family. There will be a calling hour from 10:00-11:00am, just prior to the service. The family would like to thank Hartford Health Care Hospice at Home for their help and Kelly Smith RN and Kerry Ann NA. In lieu of flowers, donations may be made to Klingberg Family Center, 370 Linwood Street, New Britain, CT 06052.

Donald Edwin Carlson, 90, of Kensington, passed away at his home on Sunday, April 29, 2018. Born in New Britain on March 22, 1928, he was the son of the late Gustave and Judith (Anderson) Carlson. He became a resident of Kensington in 1982... View Obituary & Service Information

The family of Donald Edwin Carlson created this Life Tributes page to make it easy to share your memories.

Donald Edwin Carlson, 90, of Kensington, passed away at his home...

Send flowers to the Carlson family.