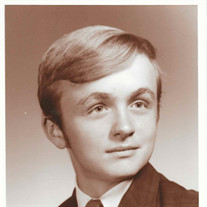 Edward J.Gentino III (64) passed away peacefully on December 27, 2017 with family by his side. Born in Hartford on November 11, 1953 to Edward and Marjorie Gentino, Ed lived most of his life in Wethersfield where he learned to sing and play trumpet in the Wethersfield school system and Wethersfield Recreation Summer Program. He enjoyed Church, Cub Scouts, Boy Scouts, playing bugle for Wethersfield Troop 85, and summer camp at Lake of Isles. Ed loved Chorus, Orchestra, Marching Band, Spring Production, Cross-Country, and Track at Wethersfield High. After graduating in 1971, he obtained an Associate Degree in Arts at Greater Hartford Community College. Ed was then employed at The Travelers Data Processing Center for many years and also volunteered at Cedarcrest Hospital regularly. Music, especially singing, was Ed's great passion. As a rare Counter Tenor, he sang solos for various choirs including City Singers of Hartford and, for over 40 years, the Christ Church Cathedral of Hartford. He played piano and organ and, in his giving nature, taught both to others without charge. He loved pets, the Yankees, stamp collecting, and assisting his Mother in the kitchen. Known to all for his gentle soul, kind heart, and cheery disposition, Ed never spoke a cross word toward anyone and worked hard for his achievements. Ed is survived by his Father and younger brothers Robert of Los Angeles and Steven of Wethersfield and is predeceased by his Mother and older brother William. Calling hours are at Rose Hill, 580 Elm St.Rocky Hill, on Wednesday January 3 from 5-7 pm followed by a memorial service at the funeral home on Thursday at 10 am and internment. Service has been postponed til Friday 10am due to the storm.

Edward J.Gentino III (64) passed away peacefully on December 27, 2017 with family by his side. Born in Hartford on November 11, 1953 to Edward and Marjorie Gentino, Ed lived most of his life in Wethersfield where he learned to sing and play... View Obituary & Service Information

The family of Edward Joseph Gentino III created this Life Tributes page to make it easy to share your memories.

Send flowers to the Gentino family.