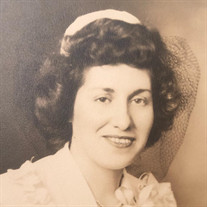 Eleanor Lombardo 1919- 2019 Eleanor (Zimei) Lombardo, 99, longtime resident of Rocky Hill, beloved wife of Paul M. Lombardo, Sr., passed away peacefully on January 7, 2019 at Glastonbury Healthcare Center. Eleanor, born to Luigi and Elisabetta (Santini) Zimei on November 14, 1919, grew up on what was formerly known as Front Street in Hartford. Eleanor was a loving wife, devoted mother, grandmother and great-grandmother. Her greatest joy in life was sharing love and laughter with her family. She was predeceased by her brothers, Bruno and Edwin Zimei; her sisters, Ida Smith and Mary Ann Salemi; her son, Paul M. Lombardo, Jr.; son-in-law, Brian McGrath and great-granddaughter Jayden Lombardo. She is survived by her beloved husband of 75 years, Paul M. Lombardo, Sr., her devoted daughter Patricia McGrath of Ellington, her son Michael Lombardo and his wife Laurie of Florida, her grandchildren Paula and Sam Keltos, Angela and Dan Montgomery, James and Nicole McGrath, Amber Lombardo and Michael Lombardo II; and 6 great-grandchildren Nathan, Juliana, Makayla, Brian, Neela and Dominic and many nieces and nephews. A special thanks to Karen Mazzarella, wonderful companion and caretaker for many years. A celebration of her life will be held on Thursday, January 10, 2019 at Rose Hill Funeral Home, 580 Elm St., Rocky Hill at 11am. Burial will follow in Rose Hill Memorial Park, Rocky Hill. Family and friends may call at the funeral home on January 10th from 9:30-11:00am, just prior to the service. In lieu of flowers, donations may be made to the Alzheimer’s Association Connecticut Chapter in memory of Eleanor Lombardo. Their address is 200 Executive Blvd, Suite 4B, Southington, CT 06489 or at www.alz.org/ct.

The family of Eleanor E. Lombardo created this Life Tributes page to make it easy to share your memories.

Send flowers to the Lombardo family.