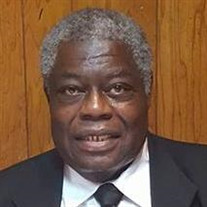 Elijah Earl Gause, son of the late Elroy Sr. and Lula Belle Gause was born on November 9, 1941 in Conway, South Carolina. His earthly life was extinguished on Tuesday, December 25, 2018. He was a graduate of the Chestnut Consolidated High School in North Myrtle Beach, South Carolina class of 1958. Upon graduation he attended Allen University in Columbia, South Carolina where he received an Associates degree. In 1963, he moved to New Haven, Connecticut where he met and married Geraldine Norman in 1964. They were blessed with one child, in 1965 he was employed by the Olin Corporation, (US Repeating Arms) as a machinist in New Haven. He retired from US Repeating Arms as the operations manager in 2001 after 36 years of dedicated service. In that same year he became the owner and operator of the Scorpio Lounge and Café. He managed the business for several years until deciding to fully retire in 2013. He was a life long member of the International F. & A.M. Masons and Order of the Eastern Star. He held various positions throughout the organization and earned the Illustrious 33rd degree. Elijah was predeceased by his wife Geraldine Gause, his parents, four brothers Charlie, Paul, Calvin and William B. Gause Sr., three sisters, Martha Ann Vereen, Lula E. Cox and Magdalene Jolley. He leaves to cherish sweet memories, his long-time companion Cora Mercer of Northford, CT., one son Kevin Gause (Carey) of Rocky Hill, CT., three grandchildren, Tre’ Michael and Lauryn Nicole Gause of Brookfield, CT., and Natalia Rose Gause of Rocky Hill, CT., five brothers, Samuel Gause of Hamden, Ct., James Peter Gause of New Haven, CT., David Gause (Dawn) of Atlanta, GA., Floyd Gause of Trenton, NJ., and Barry Gause of Longs, SC., five sisters Betty Scott of Brooklyn, NY., Alma Meyers, Thelma Gause, Helen Keel and Beverly Gause all of Longs, SC., two sisters in law Ann Gause of Fayetteville, NC., and Glorestine Gause of Hamden, CT., and a host of nephews, nieces, cousins and friends. Calling hours will be held on January 3, 2019 from 9-10am at Rose Hill Funeral Home, 580 Elm Street, Rocky Hill, CT. A memorial service will be held immediately after. A private burial for family and close friends will be held at Beaverdale Memorial Park Cemetery, 90 Pine Rock Ave, New Haven, CT at 11:45am. In lieu of flowers, the family requests that donations be made to the National Kidney Foundation.

Elijah Earl Gause, son of the late Elroy Sr. and Lula Belle Gause was born on November 9, 1941 in Conway, South Carolina. His earthly life was extinguished on Tuesday, December 25, 2018. He was a graduate of the Chestnut Consolidated High School... View Obituary & Service Information

The family of Elijah Earl Gause created this Life Tributes page to make it easy to share your memories.

Send flowers to the Gause family.