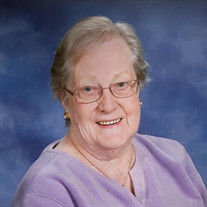 Elizabeth Ann (Hanson) Lamo, beloved wife, mother, sister, mother-in-law, grandmother and friend, passed away on Monday, May 11. Born in Newington on July 10, 1930, “Betty” was the daughter of the late Carl Albin and Anna (Pearson) Hanson. The youngest of five children, Betty was proud of her title as “the baby of the family”. From a young age, she had a strong constitution—likely borne of her experience as a survivor of the 1944 Hartford Circus Fire. After graduating from Newington High School, Betty worked for the State of Connecticut, where she met and fell in love with her husband, Salvatore. The two were married in 1954 and built a life in Wethersfield, where they raised their sons, Jeff and Dennis, and Betty worked for the town’s Board of Education for over 25 years. An incredible hostess and cook, Betty was happiest when she had a full house. Together, Betty and Sal enjoyed baking cookies and hosting card games with friends. A stalwart Swede, Betty was known for her meatballs and pepparkakors, but was equally talented in preparing Italian dishes. She loved the gift of fresh flowers, the sounds of André Rieu and the familiarity of her afternoon “stories” on ABC. A long-time parishioner of St. Paul’s Lutheran Church in Wethersfield, Betty was a member of the Sewing Circle through which she donated many blankets to the NICUs of local hospitals—a tribute to her late son, Bruce, who died in infancy. Over the span of their 40-year marriage, Betty served as a selfless caregiver to Sal, who battled Multiple Sclerosis until his death in 1995. In the years following Sal’s passing, Betty enjoyed bus trips with friends and traveling to destinations including Alaska, Missouri, Florida and Sweden. She was a devoted and involved grandmother to Katie, Conor, Dylan, Alec, Kevin, and Kelly. They will remember her pancake breakfasts, Christmas traditions and remarkable penmanship. Despite enduring many hardships, Betty was a constant source of encouragement and love to others throughout her life. She will be greatly missed by all who were lucky enough to love her. Betty leaves behind her sons, Jeff Lamo and his wife, Sheila of Wethersfield, Dennis Lamo and his wife, Vicki of East Hampton; six grandchildren, Katie O’Brien and husband, Quinn, Conor Lamo, Kevin Lamo, Kelly Lamo, Alec Lamo, Dylan Lamo and girlfriend, Tiffany; two great-grandchildren, Nora and Rory O’Brien, and many loving nieces and nephews. Betty was also predeceased by her siblings, Eric, Leonard, Elsa and Alice. Betty’s family would like to thank the wonderful staff of Maple View. A private burial will be held at Rose Hill Funeral Home. Memorial donations may be made to the Alzheimer's Association CT Chapter.

The family of Elizabeth "Betty" Lamo created this Life Tributes page to make it easy to share your memories.

Send flowers to the Lamo family.