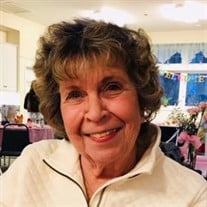 Frances (Frannie) K. Stocking, 75, of Middletown, CT passed away on Thursday, January 16, 2020 at Hartford Hospital after battling cancer. Frannie, a lifetime resident of Middletown was born on January 31, 1944, to the late Joseph & Catherine Kozlowski. Frannie graduated from Mount St. Joseph Academy in 1962 and began working for Pratt & Whitney in East Hartford as a lead technician in the Engineering Department. In 2013, Fran retired after 51 years of service. Fran had the “gift of gab”, a great sense of humor and loved to socialize with anyone who would take the time to stop and talk. She was also a dedicated UCONN basketball fan for both the men’s and women’s teams. Fran seldom missed the opening tip-off and would watch intently to the end, no matter the score. She enjoyed big family gatherings and would never turn down an opportunity to cook a homemade meal. She is survived by her husband of over 55 years, Keith Stocking, their only child, Keith Stocking Jr., and his spouse Cindy Stocking, and two grandchildren, Tyler and Joseph Stocking of Budd Lake, New Jersey. She is also survived by her younger sister, MaryAnn Buckholz and brother-in-law Jack Buckholz and niece Bethany Buckholz. Frannie will also be missed greatly by her nieces Lori Hubbard, Donna Thody and nephew Wayne Stocking, along with many other relatives and close friends. Frannie was predeceased by her older brother, Joseph Kozlowski Jr. and sister-in-law Carol Lisitano, brother in-law, Wilfred Stocking Jr. and sister-in-law Nellie. Family and friends are invited to attend her calling hours from 12 to 2 PM on Tuesday January 21, 2020, at the Rose Hill Funeral Home, 580 Elm Street, Rocky Hill, CT. The funeral service will begin at 2 PM with burial to follow. Please share any condolences, memories, or photo tributes on Rosehillfuneralhomes.com

The family of Frances Stocking created this Life Tributes page to make it easy to share your memories.

Send flowers to the Stocking family.