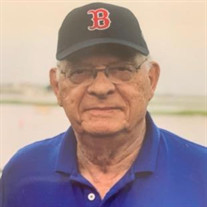 Frank Joseph Librio, 84, of West Hartford, CT and Bass River, MA (Cape Cod), beloved husband of Jo-Ann M. DiBella Librio, passed away on Wednesday, June 10, 2020 at his home with his family by his side. Frank was born May 6, 1936, and grew up in Hartford. He was the son of the late Paul Librio and Lucy Tarascio Librio. He was preceded in death by his brother Joseph (age 3), sister, Ann Librio Lammers, and brother-in-law, Daniel DiBella. As a young boy, Frank attended Saint Patrick Grammar School. He graduated from Hartford Public High School in 1954, and then graduated from Western New England College, earning a Bachelor of Science in Accounting. Frank was a Certified Public Accountant and a long-time member of AICPA, the American Institute of CPA’s, and CSCPA, the Connecticut Society of CPA’s. Frank owned his own CPA firm in West Hartford for 43 years; sharing it with his daughter, Maria, for the past 32 years. Frank married the love of his life, Jo-Ann, October 12, 1963, and they had two children: Maria Librio Judge, CPA, of Newington, CT, and Frank J. Librio Jr., of Dallas, TX and Bass River, MA. Together, they traveled the world especially enjoying Sicily and Egypt. They also made many family memories at their home on Cape Cod with their children, and Frank’s most precious gifts, his grandchildren: William Joseph Judge and Caraline Mia Judge. Frank’s extended family includes his nephews, Jonathon Lammers and his wife Melissa, along with their children, Hunter and Hazel of Portland; Timothy Lammers and his wife Keri, along with their children, Alex and Ryan of Agawam, MA, and nieces Dawn DiBella Bronowicki and her husband James, along with their children, Jessica and James of Newington; Debbie DiBella, along with her son, Stephen of Newington, and Denise DiBella Negron and her husband Jose, along with their daughter, Isabel of Newington; as well as his sister-in-law, Gloria DiBella of Newington. Frank was predeceased by his childhood friends: Marty Setter, Joey Coombs, Val D’Alessio, and Joe Lantieri – incredibly wonderful friends for more than 60 years! He proudly served in the U.S. Army, Connecticut National Guard, as a Sergeant in the 1st Battalion (M) 169th Infantry Regiment for six years. He was President of Vendors Mutual Benefit Association for 20 years. He also served as President of Rose Hill Funeral Home, located in Rocky Hill, CT, where he led efforts to restore the entire facility to the grandeur and beauty that it deserved. He was not only adamant about the restoration of the interior, but the exterior as well, planting hundreds of rose bushes to embrace the founders’ longstanding vision. He was a die-hard Red Sox fan all his life, and also loved the New York Giants. He always enjoyed rooting for the UCONN Women’s and Men’s Basketball teams, and Baylor’s basketball and football teams. Frank enjoyed building balsa wood airplanes, listening to Italian music, collecting special baseball caps, and frying his famous extra hot peppers. He was fond of celebrating a special occasion with a Southern Comfort Manhattan, or the occasional shot of Limoncello, and always enjoyed cruising the Bass River on Cape Cod in his Boston Whaler. Some of his best memories were attending the first game of the 2004 Boston Red Sox World Series with his grandson at Fenway Park, and playing in the water for hours at Parker River Beach with his granddaughter. His Cape Cod neighbors lovingly called him “the Colonel”. He enjoyed spending summers getting into all sorts of mischief. He would set off fireworks, and spend evenings around the bonfire joking, and making wonderful memories. He created nicknames for the people he loved, with the favorite nickname for himself being “Grandpa”. He was a loyal, kind, and extraordinarily generous man, with a contagious laugh. He was a man of integrity and honor, and was centered in his faith as a Roman Catholic. There is a bench placed in his honor at Parker River Beach on Cape Cod, which aptly reads, “Thanks for all the FUNN!”. He would always say that one “N” was not enough to describe the kind of fun you had with him. There will never be enough words or letters to describe the love he had for his family and friends, nor how much his family and friends will miss him. The Librio family invites all to calling hours on Friday June 12, 2020, 5-7pm at Rose Hill Funeral Home, 580 Elm Street, Rocky Hill. A Mass of Christian Burial will be held Saturday June 13, at 12PM in Saint Patrick/Saint Anthony Church, 285 Church Street Hartford, Due to Covid-19 restrictions, attendance will be limited to 50 close family and friends. Burial at Mount Saint Benedict One Cottage Grove Road, Bloomfield; where all guests will be welcome with discretion to social distancing protocol. Masks must be worn for visitation, mass and graveside ceremonies. In Lieu of flowers, the family requests that you make a donation in Frank’s memory to either, Saint Patrick/Saint Anthony Church, 285 Church Street, Hartford, CT 06103 or Rose Hill Memorial Park, Inc. a 501c 3 (statute restoration fund), 580 Elm Street, Rocky Hill, CT 06067.

Frank Joseph Librio, 84, of West Hartford, CT and Bass River, MA (Cape Cod), beloved husband of Jo-Ann M. DiBella Librio, passed away on Wednesday, June 10, 2020 at his home with his family by his side. Frank was born May 6, 1936, and grew... View Obituary & Service Information

The family of Frank Joseph Librio created this Life Tributes page to make it easy to share your memories.

Send flowers to the Librio family.