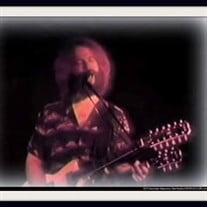 Gary Robert Gidman, 66 passed away peacefully after a lengthy and graceful battle on March 5, 2018. He was born on March 18, 1951 at New Britain General Hospital to Robert Gates Gidman and Wanda Zareck Gidman. Gary attended Newington High School and the Hartford Conservatory. His love and talent in the music world surrounded him with wonderful friends and fans throughout his life. He was a founding member of the band, Tirebiter, and played with his musical brothers for 29 years. Gary was also very well known for his 22 years of solo Wednesday night gigs at the Hungry Tiger Café in Manchester, CT as well as sharing his talents with numerous musical combos. He was predeceased by his father, Robert Gidman, and is survived by his mother, Wanda Z. Gidman of Westerly, RI, sister Marcy G. Drouin Bristol CT, sister Jennifer G. Bogue and husband Fred of Pawcatuck CT, brother Daniel R. Gidman and wife Brigitte of Dover Foxcroft ME, as well as several nieces and nephews, friends, and fans too numerous to mention. Gary's gentle spirit and unique sense of humor will be missed by many. He had an uncanny ability to remember facts and details regarding music, movies and pop culture trivia like no other person. He also went out of his way to make everyone he met feel special. A giant thank you is due the staff at Apple Rehab in Mystic, CT. The fact that Gary was able to consider this his home was of great comfort. A private burial will be held in Rocky Hill, CT at the Rose Hill Memorial Park. A memorial gathering is currently being organized where all friends, musicians, family and fans will be welcome to join together and share memories. Donations in Gary's memory may be made to the Cheryl Scott Music and Theater Scholarship Fund at Canton Dollars for Scholars P.O. Box 671 Canton, CT 06019.

The family of Gary Robert Gidman created this Life Tributes page to make it easy to share your memories.

Gary Robert Gidman, 66 passed away peacefully after a lengthy...

Send flowers to the Gidman family.