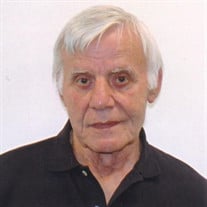 GIOVANNI ‘JOHN’ DiMascio, 80, passed away on February 21, 2021 suddenly from heart complications. He was born on May 26th, 1940 in Campo di Fano, Abruzzo, Italy to Felice and Giovina (Guglielmi) DiMascio. John leaves behind his loving wife Emilia of 58 years. He came to the United States in 1956 with his family to start a life of opportunity. He worked at Hartford Faience for 20 years and then became self-employed opening D&S market in Hartford with his partner Joseph & Tina Santoro for 14 years. After selling the market, he worked at Big Y in Rocky Hill part-time as a meat cutter for several years before retiring. John is survived by his three children; his daughter Lucia DiMascio (Rocky Hill), his son Felice (Simsbury) and daughter in-law Hilary DiMascio, his daughter Laura DiMascio (Rocky Hill), five grandchildren; Grey, Cael, Giovanni, Domenic and Michael DiMascio, his sister Pierina and brother-in-law Panfilo Guglielmi, sister-in-law Concetta Guglielmi and brother-in-law Domenico and Maria Guglielmi from Rome, Italy, and many nieces and nephews in USA, Canada, and Italy. He was pre-deceased by his parents, father and mother-in-law Armando and Lucia (Giammarco) Guglielmi, brother Nicole and sister-in-law Antonietta DiMascio, sister Emilia and brother-in-law Pasquale Guglielmi and sister Angela and brother-in-law Emidio Natale. John was a loving husband, father, and grandfather. In his youth, he enjoyed playing soccer. He is known for his delicious sausage and fried hot peppers, raising orphaned animals until they were ready to be released; particularly his bird Charlie and squirrel Sammy, he enjoyed cooking, gardening, watching soccer, traveling to Italy to visit family and friends, playing cards, and most of all taking rides to the Casino. He was a man of not many words but made many people laugh with his good sense of humor. John instilled great family values and morals and will be missed by his family and all those who had the good fortune to know him. In lieu of flowers, memorial donations may be made to WJMJ Radio 15 Peach Orchard Road Prospect, CT 06712-1052 or a charity of your choice. We would like to thank the Staff at St Francis Hospital, Hartford Hospital, Rocky Hill EMT, and Rocky Hill Police Department. Calling hours will be Thursday 9:30 – 10:30 am at Rose Hill Funeral Home 580 Elm St. Rocky Hill, CT with a 11:00am Mass of Christian burial at St Josephine Bakhita Parish at St James Church, 757 Elm Street Rocky Hill, CT. Burial afterwards will be at Rose Hill Memorial Park.

GIOVANNI &#8216;JOHN&#8217; DiMascio, 80, passed away on February 21, 2021 suddenly from heart complications. He was born on May 26th, 1940 in Campo di Fano, Abruzzo, Italy to Felice and Giovina (Guglielmi) DiMascio. John leaves behind his... View Obituary & Service Information

The family of Giovanni "John" DiMascio created this Life Tributes page to make it easy to share your memories.

Send flowers to the DiMascio family.