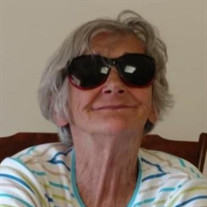 Gloria (Calabrese) Mazzaferro, age 79 of South Windsor, passed away peacefully to be with the Lord from Huntington’s Disease on March 26, 2021. Gloria was born August 6, 1941 in Hanson, Mass. and grew up in Brockton, Mass She was predeceased by a daughter Nicole (HD), a sister Shirley, Brother Carl (HD) and father Carmine. Gloria leaves behind 2 sons Paul Mazzaferro of Vernon and Michael Mazzaferro of Madison, as well as a daughter in law Danielle and 2 beloved grandchildren Rebecca and Audrey, son in law Tom Duchesneau of Ashford. Gloria was also loved on by 2 special friends Bonnie and Jill. Both gave her the most precious gift of all - their time. The highlights of this included many lobster dinners, coffee milkshakes and singing Johnny Mathis songs! Gloria was employed by Pratt and Whitney. She was a great cook, loved to garden, bird watch, listen to Johnny Mathis and power walk. She was an integral part of Dance Recitals in Boston for over 30 years. She was also active in Penney HS Booster Club. She had a great sense of humor, loved to dance and was a meticulous dresser. HD took that away but could not defeat the love in her heart which she carried until she passed. Gloria lived with Huntington’s Disease for 15+ years and although it ravaged her body, her mind and isolated her from society she still felt blessed. She lived with bravery, humility and dignity. A Christian Burial is planned for Gloria and Nicole at Rose Hill Memorial Park, Rocky Hill. Friday April 9, 2021 at 11 a.m. In remembrance of Gloria & Nicole losing their lives to Huntington’s Disease donations can be made to Heather Hankard, a brave young mother from West Hartford living with HD. Checks can be sent in Heathers name to Same Day Awards-HQ , 400 Chapel Road – Unit 1A, South Windsor, CT 06074 att: Paul Mazzaferro Please share online expressions of sympathy, memories, or photo tributes at www.rosehillfuneralhomes.com.

Gloria (Calabrese) Mazzaferro, age 79 of South Windsor, passed away peacefully to be with the Lord from Huntington&#8217;s Disease on March 26, 2021. Gloria was born August 6, 1941 in Hanson, Mass. and grew up in Brockton, Mass She was predeceased... View Obituary & Service Information

The family of Gloria Mazzaferro created this Life Tributes page to make it easy to share your memories.

Send flowers to the Mazzaferro family.