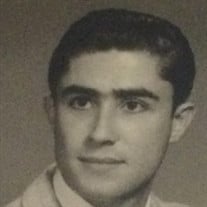 Gualberto DeJesus Rios of Hartford, known to some as “Al”, passed away December 27th, 2015 at the age of 76. Born in Utuado, Puerto Rico, April 2, 1939, he was the son of Saturnino and Dolores (DeJesus) Rios. He grew up in Utuado until he joined the U.S. Army for two years and was honorably discharged in Florida. He came to Connecticut to live with his aunt in Hartford. He met Mary and later they were married. They lived in Rocky Hill where he worked for Chemical Coatings for two years and started their family. Later, moving to Hartford, he worked at Pratt & Whitney in East Hartford for eight years and retired from the Town of Bloomfield Board of Education after thirty years on July 1st, 2002. He leaves his wife, Mary (Barr) Rios of 53 years, a son, Richard A. Rios, two daughters, Dolores M. and Rosetta A. Rios, all of Hartford. He also leaves his stepmother, Rosa Guzman Rios, four brothers, Ismar, Gilberto, Saturnino Rios Jr, all of Hartford and Alexander Rios of Puerto Rico, two sisters, Esa (Rios) Ramos and her husband Jose and Wanda Rios of Hartford, three sisters, Emma Vazquez of Lakewood, FL, Iraida (Rios) Galara and her husband Mingo and Nilda Rios from Puerto Rico. He also leaves behind many aunts, uncles, nieces, nephews, great and great great, in Puerto Rico and several states here. Al leaves two sisters-in-law, Fran Barr of Tequesta, FL, Ursula Barr of Wethersfield, and many extended family members and friends, who will miss him dearly. He was predeceased by his parents, three brothers, Jose, Raymond and Miguel Rios, two brothers-in-law, Robert J. Barr of Tquesta, FL and Allan F. Barr of Wethersfield, and a sister-in-law, Sara Sanchez. A Mass of Christian Burial will be held on Tuesday, January 5, at 10am at Sacred Heart Church, 49 Winthrop and Ely St, Hartford. Burial with Military Honors will be in Rose Hill Memorial Park in Rocky Hill. Calling hours are Monday, January 4, from 5-8pm at the Rose Hill Funeral Home, 580 Elm St, Rocky Hill. Everyone is asked to please meet at the church on Tuesday morning.

The family of Gualberto DeJesus Rios created this Life Tributes page to make it easy to share your memories.

Gualberto DeJesus Rios of Hartford, known to some as “Al”, passed...

Send flowers to the Rios family.