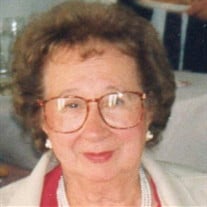 Helen A. Reals, 101, of Hartford, beloved mother, grandmother, and sister passed away peacefully on June 4, 2019. She was preceded in death by her husband Kenneth Reals, parents Theodora (Murad) and Michael Abdalla, and siblings Will, Gus, Douglas,Mary and Amelia. She is survived by daughters Susan Goodwin, and Kathryn Reals-Hegi, son-in-law Daryl Hegi, grandchildren Caroline and Daniel Hegi, two brothers George Shaheen, and John (wife Irene) Abdalla. She is also survived by several nieces and nephews. In her long life she witnessed many changes in the world. She was delighted to learn how to use a computer at the age of 90. She derived great pleasure from cooking meals and desserts for family and friends. You never went to her house without being offered something to eat, and a video to watch! After her retirement from Aetna in the early 1980s, she took up babysitting, and became a second mother to numerous children. She adored old movies, and had an encyclopedic knowledge of films from the 20s, 30s, 40s, and 50s, and could rattle off the names of all the stars from her favorite films, even as her memory began to dim. In her youth, she began a hobby that would last her lifetime, writing fan letters, and collecting autographs, and photos from stars of stage, screen, and TV. One of her great loves was baseball, but most especially the Boston Red Sox. She suffered the disappointments of the Curse of the Bambino, yet lived long enough to see redemption come in 2004. In her old age, she loved nothing more than to spend afternoons and evenings catching up on her soap operas and watching favorite old movies over, and over again, reciting dialogue from memory, and singing along. Helen loved flowers, so in lieu of charitable donations, flowers, even handpicked, would be appreciated. A funeral service will be held on Wednesday, June 12, 2019 at 2 PM in the Rose Hill Funeral Home 580 Elm St. Rocky Hill. Burial will follow in Rose Hill Memorial Park, Rocky Hill. Family and friends are invited to call at the funeral home from 1- 2 PM just prior to the service.

Helen A. Reals, 101, of Hartford, beloved mother, grandmother, and sister passed away peacefully on June 4, 2019. She was preceded in death by her husband Kenneth Reals, parents Theodora (Murad) and Michael Abdalla, and siblings Will, Gus, Douglas,Mary... View Obituary & Service Information

The family of Helen A Reals created this Life Tributes page to make it easy to share your memories.

Send flowers to the Reals family.