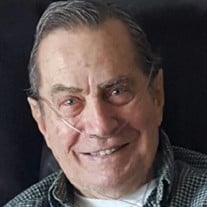 Henry “Bill” Wilson, 83, of Granby and formerly of Rocky Hill, passed away on Sunday, September 4, 2016. He was born in Fayetteville, NC to Henry and Susie (DePaul) Wilson. Bill attended Wethersfield High School (’51), served as a Sergeant FC in the US Army in Korea, and then attended Hillyer College in Hartford, studying Business Administration. He worked as a salesman for Connecticut Printers and a Graphic Design Manager at Aetna Life & Casualty in Hartford. Spending most of his life in Rocky Hill, CT, he was a wonderful father of two and loving husband of 54 years to his dear wife Janice. In the mid-70’s he built his family a vacation cottage in Caroga Lake, NY and enjoyed spending his summers there – a home still enjoyed by his family today. He was generous, kind, and had a wonderfully dry sense of humor. Bill loved home improvements, classic movies, Frank Sinatra, and Italian food. Bill was predeceased by his wife, Janice (Kroll), and his two brothers, Joseph and Richard. He is survived by his son, Brian of Miami, FL, daughter, Mary Munson and Brent Munson of Granby, CT, favorite cousin, Josephine “JoJo” Hedges, and his beloved grandchildren, Mikayla, Austin, and Henry. A funeral service will be held on Friday, September 9, at 11am at the Rose Hill Funeral Home, 580 Elm St., Rocky Hill, CT. Burial will follow in Rose Hill Memorial Park. Family and friends may call at the funeral home from 10-11am, just prior to the service.

The family of Henry "Bill" Wilson created this Life Tributes page to make it easy to share your memories.

Send flowers to the Wilson family.