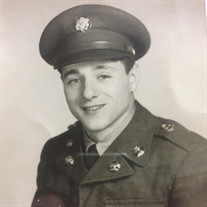 James John (Sonny) Spadorcia, age 88, beloved husband for sixty years of Elena (Pizzoferrato) Spadorcia, passed on Monday, March 20 at home with his family by his side. Born October 9, 1928 in Hartford, CT to the late Joseph and Clara (Gesuelle) Spadorcia, Jim was the first of five children. The family grew up on Front Street in Hartford where Jim and the family were extremely proud of their Italian heritage. Jim spoke often of the business his father ran in that neighborhood, and of his own childhood including the many jobs he held as a young boy to help support his family after his father passed. After graduating from Hartford High School, Jim joined the armed forces in 1948 and served in both the U.S. Navy and the U.S. Army where he received numerous citations and honorable discharges. He then joined the Aetna Life Insurance Company where he held memberships in the Bridge Club and Men’s Club, and worked for 35 years until retirement in 1990. Several years ago, Jim was the recipient of the Boys Scouts’ Lifetime Achievement Award for his dedication to the Boy Scouts of America. Jim was a member of the American Legion, the Veterans of Foreign Wars, and the Rocky Hill Seniors. Jim leaves behind to celebrate his life his wife Elena, and his four children and their spouses, Doreen and husband Rick (Cavo), Donna and husband Michael (Giuffrida), Jim and wife Lynn (Spadorcia), and Marie and husband Sal (Lonero). He also leaves his sister Ann (Betancourt), sister-in-law Licia Pizzoferrato, and sister-in-law Dina Pizzoferrato who holds a special place in the Spadorcia family. He also leaves many nephews and nieces. Jim was predeceased by his brothers Joseph and John, and his sister Margaret (Vaccaro). He is survived by his eleven loving grandchildren, Emily and Elena (Ridenour), Jeffrey, Brian, Scott and Laura (Giuffrida), Amanda and Alison (Spadorcia), and Stefen, Damon and Sal (Lonero). He had a special bond with his grandchildren, helping to care for them after his retirement. Throughout the years he was in touch with them through visits, calls and texts, all of which he looked forward to and thoroughly enjoyed. Jim exercised daily, sometimes multiple times, and relished physical fitness. He also enjoyed travel and had many opportunities to visit numerous countries. Known for his infectious smile, intellectual curiosity, and fun loving nature, Jim enjoyed being in the company of family and friends and will be sorely missed by all. Calling hours are Saturday, March 25, from 9:00 a.m. to 10:30 a.m. at the Rose Hill Funeral Home, 580 Elm Street, Rocky Hill, followed by a Mass of Christian Burial at 11:00 a.m. at Corpus Christi Church, 84 Somerset Street, Wethersfield. Burial will follow at Rose Hill Memorial Park. In lieu of flowers, for those who wish to do so, the family suggests donations be made to the Parks and Recreation Department, 761 Old Main Street, Rocky Hill, c/o Lisa Zerio in memory of Jim Spadorcia. The funds will be used to beautify the parks in Rocky Hill.

James John (Sonny) Spadorcia, age 88, beloved husband for sixty years of Elena (Pizzoferrato) Spadorcia, passed on Monday, March 20 at home with his family by his side. Born October 9, 1928 in Hartford, CT to the late Joseph and Clara (Gesuelle)... View Obituary & Service Information

The family of James John Spadorcia created this Life Tributes page to make it easy to share your memories.

Send flowers to the Spadorcia family.