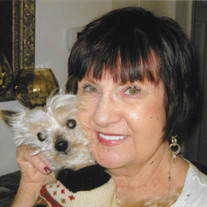 Jeannette Ann Conderino, 74, of Belmont, VT, passed away after a courageous battle with pancreatic cancer on August 20, 2015. She was married to her beloved husband of 35 years, Philip Conderino and was the daughter of Paul and Helen (Wieliczka) Cardalico. Jeannette was born in Hartford,CT and was raised in West Hartford where she graduated Conard High School, Class of 1959. She was employed at Cigna in Group Renewal Underwriting as a secretary and fondly remembers being chosen to operate a large LGP thirty machine in the early 1960's. Her next 14 years were spent at home lovingly raising her four children. She later worked at area businesses including Paul's TV & Sons, ServiceMaster and Southeast Paving as an Office Manager. She came out of retirement to work part-time at Congregational Church in Newington, a post she retired from to help care for her new twin grand daughters, Sarah & Grace. Jeannette and Phil left the area upon Phil's retirement and maintained homes in VT and NC. In all cases, Jeannette was an active parishioner in the Catholic churches they attended : Holy Spirit in Newington, in which she taught religious education to first and seventh graders, St Mary's, Corpus Christi, Church of the Annunciation in VT and Our Lady Star of the Sea in SC. They were members of Okemo Valley Golf Club in Ludlow, VT and Jeannette loved her time with her golfing friends and thanks them for their support and was so touched when upon her illness they named their team after her. She loved to sing and dance, fondly remembering a solo dance to the song Mame. She enjoyed photography and was proud of her pictures that won in local calendar contests in Mt. Holly,VT. She was also proud of a poem she wrote which was included in the "Sound of Poetry" located in the National Library of Poetry. Jeannette loved meeting new friends and enjoyed her time in VT and NC always helping her friends when in need. Jeannette's family always came first and she was a huge part of all our lives. She will be forever loved and missed dearly. She was a woman of incredible faith and we find comfort in knowing she is now with our Lord. Jeannette is survived by two daughters, Donna (Mike) Downes, Jeanie (Kevin) Smith and two sons, Wayne (Tammy) Brookbanks and Paul Brookbanks. Three step-daughters, Kim (Jesse) Branche, Lisa (Bruce) Chapman and Lori Conderino. Ten grandchildren, Brittney, Wayne and Courtney Brookbanks, Paula Niklasson, Sarah and Grace Downes, Skylar Sierra and Sophia Smith and Blake Chapman and a great granddaughter Jeannette Clair Allen. Jeannette is also survived by two brothers, Richard and Leonard Cardalico. She also leaves her rescue dog Frankie, rescued at 9 years old, now 17. She also leaves many nieces and nephews, especially Little McGoo and many great nieces and nephews. Jeannette was predeceased by her parents, her first husband George Brookbanks, her brother Ronald Cardalico, Stepmother Helen Leonard Cardalico and sister-in-law Gail Cardalico. There will be a calling hour on Tuesday August 25, 2015 from 9 to 10:30 AM at the Rose Hill Funeral Home 580 Elm St. Rocky Hill, followed by a Mass of Christian Burial at 11AM in Corpus Christi Church, Wethersfield. Burial will be in Rose Hill Memorial Park, Rocky Hill. In lieu of flowers, memorial donations can be made in her name to the Foley Cancer Center, Rutland Regional Medical Center, 160 Allen Street,Rutland,VT 05701.

Jeannette Ann Conderino, 74, of Belmont, VT, passed away after a courageous battle with pancreatic cancer on August 20, 2015. She was married to her beloved husband of 35 years, Philip Conderino and was the daughter of Paul and Helen (Wieliczka)... View Obituary & Service Information

The family of Jeannette A. Conderino created this Life Tributes page to make it easy to share your memories.

Jeannette Ann Conderino, 74, of Belmont, VT, passed away after...

Send flowers to the Conderino family.