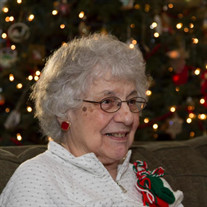 Joan (Prunier) Filkins, who proudly reached the age of 93, died peacefully in the presence of her family at the Masonic Health Center of Wallingford CT, on October 24, 2021. She is survived by her son Charles Filkins Jr., his wife Kathy and two grandsons, Connor and Garret; her brother Donald Conway, his wife Kathy, and their daughter Megan; and a host of nieces, nephews, first, second and third cousins. She was preceded in death by her mother Ella (Eukers) Cosway and father Louis Prunier; her sisters Jackie Capitani and Beverly Calkins; her brother Richard Prunier; her beloved cousin Billy Corbett; and her many aunts and uncles. Born on August 24, 1928, she lived much of her younger life in Hartford, CT. She attended Our Lady of Sorrows Church, where she married Charles “Herbie” Filkins in 1956. She enjoyed the many benefits of the large Eukers family: annual family gatherings; trips to the Rhode Island beaches; and watching that family grow ever larger through the years. She especially enjoyed dinners on her brother’s deck. People speak of “The Dash”, the life you led between your birth and death dates that is represented by a simple dash. Joan’s “dash” was one of giving. She always put others first, looking after everyone else in her life. She sacrificed much and worked tirelessly raising her son. People often said, “Give her a nickel and she’ll save six cents.” In her many years at Grand Union she treated “her customers” like family, no matter which store she worked in. Later in life, Joan took care of her cousin Barbara Gouin-Trudeau in her fight with cancer. No matter where she was or who she was with, Joan looked for a way to help. A Mass of Christian Burial will be held at 10:00 AM on Monday, November 29th, at the St Mary Roman Catholic Church, 626 Willard Ave. Newington, CT. Burial will follow in Rose Hill Memorial Park, Rocky Hill. In lieu of flowers, please donate to your favorite charity in Joan’s name. Please share online expressions of sympathy, memories, or photo tributes at www.rosehillfuneralhomes.com.

Joan (Prunier) Filkins, who proudly reached the age of 93, died peacefully in the presence of her family at the Masonic Health Center of Wallingford CT, on October 24, 2021. She is survived by her son Charles Filkins Jr., his wife Kathy and... View Obituary & Service Information

The family of Joan Filkins created this Life Tributes page to make it easy to share your memories.

Joan (Prunier) Filkins, who proudly reached the age of 93, died...

Send flowers to the Filkins family.