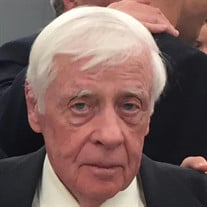 John (Jack) D. Barry, 91 of West Hartford, CT passed away on October 3, 2020 at John Dempsey Hospital. Born on July 25, 1929 in Lewiston, ME he was the son of the late Thomas J. and Honora (Burns) Barry. Jack graduated from Hartford Public High School and The University of Connecticut majoring in Geology. He also did post graduate work in Geology at West Virginia University. Following several years in the Army, Jack worked for the Town of West Hartford and then had a long career working as an Engineer for The State of CT Department of Transportation. Jack was an avid runner in his youth, on both cross country and track teams in high school and college. In later years he was an avid walker. His many interests and hobbies included gardening, bird watching, automobiles, geology and carpentry. He was a general overall handyman who could fix or build anything. He enjoyed spending time at the beach in Old Saybrook with his family, finding new places to spot birds, and spending time outside as a lifelong nature lover. Jack was dedicated to his family and was always a devoted fan at his children’s and grandchildren’s sporting events throughout his life never missing a meet, match or game. Jack was predeceased by his wife of 58 years, Grace Nylen Barry. He leaves behind two sons, David J. Barry and his wife Anne of West Hartford, and Paul D. Barry of Silverthorne, CO; a daughter Joyce E. Barry of West Hartford; and his beloved grandchildren Kristen, Mike and Jack Barry as well as many nieces and nephews. Jack was predeceased by two brothers Robert and Richard, and two sisters Dorothy Shuler and Joan Goodwin. A graveside service will be held at a later date at Rose Hill Memorial Park, 580 Elm Street, Rocky Hill, CT. In lieu of flowers, donations in Jack's memory may be made to The National Audubon Society.

John (Jack) D. Barry, 91 of West Hartford, CT passed away on October 3, 2020 at John Dempsey Hospital. Born on July 25, 1929 in Lewiston, ME he was the son of the late Thomas J. and Honora (Burns) Barry. Jack graduated from Hartford Public... View Obituary & Service Information

The family of John D. Barry created this Life Tributes page to make it easy to share your memories.

Send flowers to the Barry family.