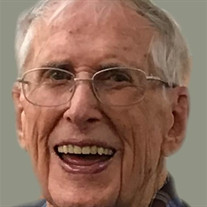 John Sir Bedford, 96, passed away peacefully on April 16, 2020 in Rocky Hill, CT. Born in Hartford in 1923 to Raymond and Mary (Freeburn) Bedford, he was a lifelong Connecticut resident. After serving in the U.S. Navy during World War II, he married Doris (“Dee”) Calabro and has not left her side in the 72 years since. John enjoyed camping, dancing, crafts and family. John and Dee were members of the Rip Snorters square dance club in the 60’s and 70’s. They spent summers camping at the Witch Meadow Campground in Salem CT. Dressed as elves, they handed out Christmas gifts for two generations of movie goers at the Elm Theatre in West Hartford with the P&W mens club. John spent countless hours on crafts, churning out plane whirlygigs by the dozens in his spare time. Every Thursday was family night at John and Dee’s, where family and friends gathered to chat about events large and small, and watch the family grow. John is survived by his beloved wife Dee of Rocky Hill CT, his sister Barbara Bridges formerly of Avon CT and his children; Diane and husband Bill Allen of Newington CT, Laurie and husband Charlie Beach of Lake Alfred FL, John Bedford II of Southington CT, Gary Bedford and wife Vanessa of Newington, eight grandchildren, ten great grandchildren and several nieces and nephews. He was pre-deceased by his sister Joan Sullivan of Charleston RI. To keep our family and the community safe, we have decided to have a celebration at a later date. Arrangements are being made by the Rose Hill Funeral Home in Rocky Hill, CT. In lieu of flowers please consider a memorial donation to the Fisher Center for Alzheimer's Research Foundation, New York, NY, or the Veterans of Foreign Wars Foundation, Kansas City, MO.

John Sir Bedford, 96, passed away peacefully on April 16, 2020 in Rocky Hill, CT. Born in Hartford in 1923 to Raymond and Mary (Freeburn) Bedford, he was a lifelong Connecticut resident. After serving in the U.S. Navy during World War II, he... View Obituary & Service Information

The family of John Sir Bedford created this Life Tributes page to make it easy to share your memories.

Send flowers to the Bedford family.