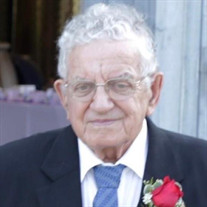 Joseph Lawrence "Capet" Crozier, 91, of West Hartford, passed away suddenly at home with family on Thursday, (November 25, 2021). He was born in Grand Falls, New Brunswick, Canada, the son of the late James Crozier and Anna (Michaud) Fraser, and lived in West Hartford for 59 years. A communicant of the Church of St. Brigid, Elmwood, Ct. He served in the American Air Force from Aug 16, 1959 to Aug 15, 1961 as a Ground Communications and Equipment Repair Man. On February 19, 1960 he became a US citizen. He worked at Arrow Hart as a Quality Inspection Engineer. He also bartended at the Casio Bar in Frog Hollow. In his free time he was working on projects at home or for his friends. He was a cancer survivor that fought off cancer three times. He leaves his loving wife Yolande (Cote) Crozier of 61 years of marriage, three sons, Raymond and Nancy Crozier of Avon, CT, Frank Crozier of Meridian, CT, Steven and Brenda Crozier of West Hartford, CT. Also surviving his three sisters, Nora Crozier of Wethersfield, CT, Ethyl Edwards of Niceville, FL, and Patricia McAllister of Peterborough, Ontario. Grand children Andrew Crozier and fiancée Dee-Ann McCarthy of Manchester, Ct, Phillip Crozier of Unionville, CT, Megan Marie Soucy of West Hartford, CT. He was predeceased by his two brothers , Roland Crozier and Cecil Crozier, and sister Greta Crozier. Family and friends are invited to call on Friday (December 3, 2021) from 10 AM to 12 PM at the Rose Hill Funeral Home, 580 Elm St. Rocky Hill. A funeral service will follow at 12 Noon in the funeral home. Burial will be in Rose Hill Memorial Park, Rocky Hill. Memorial donations in his memory may be sent to the American Cancer Society in lieu of flowers. Please share online expressions of sympathy, memories, or photo tributes at www.rosehillfuneralhomes.com.

The family of Joseph Lawrence Crozier created this Life Tributes page to make it easy to share your memories.

Send flowers to the Crozier family.