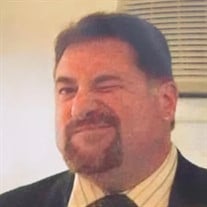 Lawrence C. Lentini “Larry” 61, of Cromwell, passed away unexpectedly on February 20, 2020. Born July 30th, 1958 to Camilla (Roszkowski) and Michael A. Lentini, Larry graduated Pulaski High School in 1976. He proudly served in the U.S. Navy as an Aviation Electronics Technician, Petty Office Third Class, aboard the U.S.S. Dwight D. Eisenhower CVN-69. Upon returning home, Larry was employed by Konica business systems as an electronic technician and joined the family business, Lentini Communications in Newington, CT, until retiring a few years ago. An avid golfer and bowler himself, Larry enjoyed UCONN basketball, Sunday football games, casino trips, concerts, and spending time with his family. A caring and loving Father, Husband, Brother, Godfather, Grandfather, Uncle, Nephew and friend, Larry leaves to mourn his passing his daughters, Tina-Marie Lentini of Bristol and Angela Stachelek and husband Don of Portland; his wife of 10 years, Virginia (Biskupiak) Lentini and his previous wife of 14 years, Wendy (Chalmers) Lentini, step-children who he welcomed and loved as his own, Joseph (Lauren) and Sean (Adrianna) Janusonis, Christina Hanan, Samantha, Patrick, and Jason Lentini, his brother Alex Lentini and wife Rhonda of Cromwell, sister Christine Lentini of Farmington, god daughter Athena McAlenney and husband John of Westport, niece Jillian Kelley and husband Jon, and nephew Michael Gwiazdowski as well as additional family and friends. His pride and joy was the time he spent with his grandchildren Aubrey Puzzo, Hunter Michalski, and Declan Stachelek. Larry was predeceased by his parents Michael A. and Camilla Lentini, and brother Michael H. He will be fondly remembered for all his many “Larry-isms”, for his brutal honesty, and his pure heart. A Celebration of Larry’s Life will be held on Tuesday (March 3, 2020) from 5 to 7 PM, family and friends may share words of remembrance at 7 PM at the Rose Hill Funeral Home 580 Elm St. Rocky Hill. Burial will be private at the convenience of the family. Please share online expressions of sympathy, memories or photo tributes at www.rosehillfuneralhomes.com.

The family of Lawrence C. Lentini created this Life Tributes page to make it easy to share your memories.

Send flowers to the Lentini family.