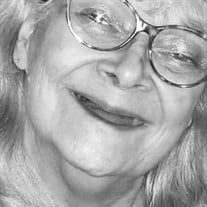 Marcy Gidman Drouin, 69, of Bristol, CT, passed away peacefully on February 12, 2022, after a brief illness. Born April 2, 1952 to Robert and Wanda Gidman, Marcy graduated from Newington High School in 1970. She is survived by her children, Joseph Drouin and his wife Rachel, of Newington, and Amy Drouin, of Bristol; her grandchildren, Dylan and Chloe Drouin; her mother, Wanda Gidman, of Pawcatuck; her sister, Jennifer Bogue and her husband Fred, of Pawcatuck; her brother, Daniel Gidman and his wife Brigitte, of Dover Foxcroft, ME; several nieces, nephews, a great-niece and great-nephews. She is preceded in death by her father Robert and her brother Gary. Marcy's love of and talent for music was well known and often enjoyed throughout Central Connecticut. She was an accomplished vocalist, having studied opera in her youth. She enjoyed singing sacred music in any choirs that would have her in her later years. Marcy also had a deep fondness for animals, especially cats and birds, and was never without the company of her furry or feathered friends. She was deeply proud of her children, and often bragged about their talents and accomplishments to her friends and family. In 2006, Marcy followed Amy to Florida, where she began a new career at Aetna, and quickly rose through the ranks to become the lead Senior Analyst on her team. After returning to CT in 2011, she continued to work from home, long before it was cool, until her retirement in 2016. Marcy had several "bonus children" who also loved her dearly, and will miss her influence in their lives. She had an ability to make friends everywhere she went, never meeting a stranger. Marcy was known to all as a kind, strong woman who loved her family, word games, music, and the occasional glass (or three) of scotch. There will be a private, graveside service in the spring, and, per Marcy's explicit instructions, (and to avoid being haunted by her for eternity) her children will throw a "Huge, Old School Throw Down" party in the summer. All are welcome. In lieu of flowers, please choose your favorite charity, and make a donation in her name. For those who would like to give to a charity Marcy would have chosen, please consider Panda Paws, and Villalobos Rescue Center.

Marcy Gidman Drouin, 69, of Bristol, CT, passed away peacefully on February 12, 2022, after a brief illness. Born April 2, 1952 to Robert and Wanda Gidman, Marcy graduated from Newington High School in 1970. She is survived by her children,... View Obituary & Service Information

The family of Marcy Drouin created this Life Tributes page to make it easy to share your memories.

Send flowers to the Drouin family.