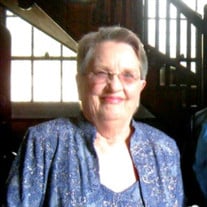 Margaret Mary (Egan) Morris, 88 of Cromwell, passed away peacefully at home on Monday, (February 8, 2021). She was born in Hartford on September 15, 1932, a daughter of William and Mary Anne (Murry) Egan. Margaret grew up in East Hartford and moved to Hartford in 1948. She graduated from Hartford Public High, Class of 1950. Margaret married Richard B. Morris on September 19, 1953. They settled in Enfield where they raised their six children. At the time of Richard's passing in 2007 they had been married for 54 years. After his passing she went to live in Cromwell with her daughter Marianne and became a parishioner of St. John Church. Margaret had worked as an Executive Assistant at Mt. Sinai Hospital and later at Levitz Furniture. A loving and devoted mother and grandmother, Margaret leaves behind her six children, Marianne Carbonero of Cromwell, Christine Moultrie of Springfield, MA., Richard Morris of Enfield, Andrew Morris and his wife Jen of Rocky Hill, Paul Morris and his wife Christine of Westbrook, and Joseph Morris of Enfield; a sister, Anne (Egan) Goodrich of Portland; a brother, Joseph Egan and his wife Jacqueline of Newington; her beloved grandchildren, Sean Morris, Erin Morris, Joseph Carbonero, Kasandra Moultrie, Olivia Moultrie, Leon Moultrie, Christopher Moultrie, Robert Morris, Patrick Morris, and Michael Morris; a cousin, Margaret Bohle of Hornchurch, England. She also leaves numerous nieces and nephews. She was predeceased by a brother, Liam Egan; a daughter-in-law, Elizabeth Morris; son-in-law, Joseph Carbonero; and brother-in-law, Bryant Goodrich. Due to Covid-19 restrictions, services and burial will be private and at the convenience of the family. In lieu of flowers donations may be made to the Connecticut Food Bank, 2 Research Pkwy. Wallingford, CT. 06492 or to Foodshare 450 Woodland Ave. Bloomfield, 06002. Please share online expressions of sympathy, memories or photo tributes at www.rosehillfuneralhomes.com.

Margaret Mary (Egan) Morris, 88 of Cromwell, passed away peacefully at home on Monday, (February 8, 2021). She was born in Hartford on September 15, 1932, a daughter of William and Mary Anne (Murry) Egan. Margaret grew up in East Hartford and... View Obituary & Service Information

The family of Margaret Mary Morris created this Life Tributes page to make it easy to share your memories.

Send flowers to the Morris family.