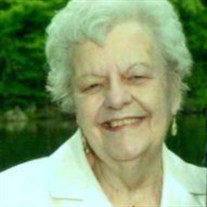 Marilyn Lindberg Coughlin, 94, of South Windsor, CT, went home to the Lord on April 5, 2022. Marilyn was born in Springfield, MA on May 26, 1927, daughter to Ann and Alexander Lindberg. At age three, she moved to Hartford, CT, and was raised by her Aunt and Uncle, Nellie and Stephen Butryman. After graduating from Bulkeley High School, she became employed by Travelers Insurance Company where she met the love of her life, William Coughlin, Jr. Marilyn and Billy were married for 59 years, until his passing in 2008. Marilyn had many passions in her lifetime. As a teenager, while working at a local horse stable, she developed a love for horseback riding, a hobby she kept up with into her 60’s. An accomplished singer, she performed at the Bushnell Theater in Hartford as a young woman and always sang in church choirs over the years. An avid bowler and tennis player, she hardly missed a Pete Sampras or Roger Federer tennis match on television. She was a lover of animals, having many pets over her lifetime, including, recently, her much adored Flicka. Marilyn enjoyed travel, spending many vacations with Bill in their beloved Bermuda, and trips to Alaska and California in more recent years. Marilyn, with Bill, were dedicated Soldiers of The Salvation Army; with Marilyn working the red kettle bells during the Christmas season. Her greatest passion was being a loving and devoted mother and wife, while raising her family in Old Wethersfield, CT. Her strong Christian faith guided her life and Marilyn was the spiritual backbone of the Coughlin family. Marilyn leaves behind her two children: Laurie Coughlin Larson and husband Alan Larson of South Windsor, and Matthew Coughlin and wife Dawn Kelly Coughlin of Sandy Hook. Also, her four grandchildren: Stephanie Larson of Seward, Alaska, Daniel Larson of South Windsor, Jessica Coughlin of Winsted, and Kelly Coughlin of Philadelphia, PA. Marilyn also leaves behind her half-brother Perry Lindberg and half-sisters Susan Shipman and Karen Miller. Services will be held on Saturday, April 9, 2022 at Rose Hill Funeral Home, 580 Elm Street, Rocky Hill. Calling hour begins at noon, followed by a Memorial Service at 1:00 pm In lieu of flowers, donations may be made in Marilyn’s memory to The Connecticut Humane Society, 701 Russell Road, Newington, CT 06111 or a charity of your choice.

Marilyn Lindberg Coughlin, 94, of South Windsor, CT, went home to the Lord on April 5, 2022. Marilyn was born in Springfield, MA on May 26, 1927, daughter to Ann and Alexander Lindberg. At age three, she moved to Hartford, CT, and was raised... View Obituary & Service Information

The family of Marilyn L. Coughlin created this Life Tributes page to make it easy to share your memories.

Send flowers to the Coughlin family.