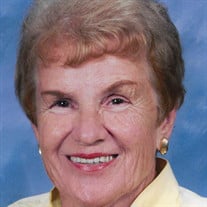 The night sky gained a new star – shining as brightly as she did on Earth!! Martha (Lemieux) Mekkelsen, 92, of Plantsville and formerly of Kensington, died peacefully after complications of Alzheimer’s Disease. She was the beloved wife of 73 years, to Fred Mekkelsen Jr. She was born in Graniteville, VT on December 2, 1923. She was the daughter of Alidor and Antoinette Lemieux. Enduring the loss of her mother at an early age and the separation from brothers and sisters – they would all reunite as adults years later. That bond grew stronger over the years and they would enjoy countless family gatherings and celebrations. She graduated from St. Michaels High School in Vermont and moved to CT at age 18. She was employed at Fafner Bearing Company in New Britain as an assembler doing piece work on ball bearings. She retired after 25 years. Her family came first always! She was a devoted wife to her husband Fred and a loving and caring mother to Fred (Skip) Martha and Stephen, sharing a strong belief of family and faith. She enjoyed being “Nanny” to her 8 grandchildren and 15 great grandchildren. She shared “special events” with them and was involved and present for their various activities, school, dancing, or sports events, cheering them on! Martha enjoyed the outdoors, working in her yard after her retirement. She always had a puzzle she was involved in completing – even if it took days. She volunteered her time at St. Paul Church in Kensington, putting together rosary beads to send to impoverished countries. Martha and Fred enjoyed traveling to Florida during the winter months for over 15 years. She would always say later in life, “ I’ve had such a good life – Freddie and I have been blessed”. Besides her husband Fred, she is survived by her daughter Marty LaBrie and husband John of Southington, CT, son Stephen and Paula McNeill of Lebanon, CT, daughter-in-law Rita Rizzo and husband Don of Southington, her grandchildren Kristen, Kendra, Nicole, Mikel, Jennifer, Sherri, Steve and Autumn, along with 15 great grandchildren. She is also survived by her brother Norman Lemieux of Bristol as well as many nieces, nephews and longtime friends. She was predeceased by her son Fred (Skip) Mekkelsen, sisters Madeline, Rita, Judy, and brothers Conrad, Raymond, Roger and Clem. The family wishes to thank The Hospital of Central Ct, ICU Unit, Mulberry Gardens and a special thanks to Esther Koomson, for her loving care and compassion shown to Mom these past nine months. Services will be held on Saturday, October 8, 2016 at Rose Hill Funeral Home, 580 Elm St, Rocky Hill, CT. The family will receive friends from 10am to 11am with a memorial service following at 11am. Burial will be in Rose Hill Memorial Park. In lieu of flowers, donations in Martha’s memory may be sent to St. Jude’s Children’s Hospital, 501 St. Jude Place, Memphis, TN 38105 or online at www.stjude.org.

The night sky gained a new star &#8211; shining as brightly as she did on Earth!! Martha (Lemieux) Mekkelsen, 92, of Plantsville and formerly of Kensington, died peacefully after complications of Alzheimer&#8217;s Disease. She... View Obituary & Service Information

The family of Martha Margaret Mekkelsen created this Life Tributes page to make it easy to share your memories.

The night sky gained a new star – shining as brightly as she...

Send flowers to the Mekkelsen family.