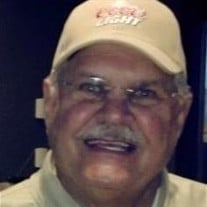 Michael A. Liappes, 75, of Old Saybrook, CT passed away unexpectedly on May 3, 2018. Born in Hartford, CT to loving parents Manuel and Virginia Liappes. Known to many as “The Golden One”, “The Lip”, “Ditka”, “Chappie”, “Duece”, and of course “Uncle Mikie.” Mike, at heart, was an educator, spending 33 years in the East Hartford education system, teaching science and retiring as Assistance Principal of East Hartford High School. He was an ardent sports fan and coached baseball and basketball programs, winning championships in both sports. After retirement he couldn’t walk away and continued as a substitute teacher in Westbrook High School and followed the student sports programs there. Mike was something of an athlete himself playing on the Bulkeley High School varsity baseball team and was selected to the All-Conference Team in 1960. After HS graduation, he attended CCSU graduating with his BS in 1965. He played college ball and was captain of the team his senior year. While starting his career as an educator, he continued to play in the Hartford Twilight League and was inducted in the Hartford Twilight League Hall of Fame. He coached baseball at various levels beginning as an assistant coach at CCSU, leading to a head coaching role at Hartford Community College, and eventually head coaching the Penny High School varsity team until 1985. The Penny team won the league title four times and the CIAC Baseball LL Championship in 1983. Mike also coached basketball at the high school varsity level winning two league championships and recording an undefeated season. He was recently selected to the BHS Athletic Hall of Fame as a result of his many career accomplishments on and off the field. Mike also spent many years bowling at Bowl-a-Rama in Newington, competing with his brothers, sister, nephews and other family members. In retirement, Mikie, a lover of all things sports or politics, food, and drink (and talking) enjoyed partaking in all those activities in the company of his many shoreline friends in the Old Saybrook and Westbrook area. He was an active member of the Westbrook Elks having served as Chaplin for a number of years. He is predeceased by his beloved sister Elaine Maulucci, his sister-in law Dorothy Liappes, and his neice Leah Liappes. He is survived by his nephew Robert and Carolyn Maulucci and their children Juliana & Alesandra, his niece Christine &Thomas Harley and their daughter Nicole, his brother Charles Liappes and children Michael and Jennifer, his brother Kenneth Liappes with partner Judy Carino and children Aleece, Amy, Gena, Kenny and Justin, his cousin Eileen O’Donnell with many more beloved grand nieces, nephews. Family and Friends are invited to Rose Hill Funeral Home for calling hours on Thursday May 10th from 4-7pm. There will be a mass of Christian burial on Friday May 11, 2018 at Saint Josephine Bahkita Parish at Saint James Campus. The burial at Rose Hill Memorial Park will immediately follow. In lieu of flowers, the family asks for those to place donations in Mike’s memory to the Shoreline Soup Kitchen.

The family of Michael A. Liappes created this Life Tributes page to make it easy to share your memories.

Michael A. Liappes, 75, of Old Saybrook, CT passed away unexpectedly...

Send flowers to the Liappes family.