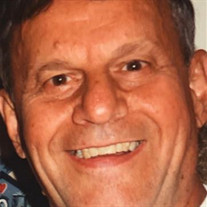 Michael John Slahtosky (Mike, Me-ha, Dad, Gramps), 91, of Windsor Locks, Connecticut passed away peacefully Monday October 7th at Hartford Hospital. He was born in Cohoes, NY on June 5th, 1928 to Michael Slahtosky and Sophie Sidlosky Michael was one of 6 siblings, brothers John, Albert, and sisters Kate, Mary, and Dorothy. The family moved to Southington, CT in 1943. Michael graduated from Southington High School where he played on the football team. He entered the Air Force in 1947. He was stationed around the country, attending A&E Tech School at Keesler Air Force Base in Mississippi and ACFT Elect School at Chanute Air Force Base in Illinois. His final station was at Offutt Air Force Base in Nebraska, serving in the 3902D Organizational Maintenance Squadron during the Korean War. He was discharged in 1951 with a Good Conduct Medal. While stationed in Nebraska, he met the love of his life Norma Jean Mielke in Omaha at a local roller skating rink. They married in 1951 and after his discharge, moved to Windsor Locks, Connecticut. They had two children Diane and Dale. For 39 years he worked at Hamilton Standard with the Space Technology Program. He retired in 1994. He supported many charitable organizations during his whole life including many environmental and children’s programs. He enjoyed playing golf, bowling, baseball, and traveling. He collected stamps and coins his whole life, eventually donating them to kids collectors clubs all over the United States. He was predeceased by his wife Norma Slahtosky, brothers John, Albert, and sisters Kate and Mary. He is survived by his sister Dorothy, son Dale Slahtosky, daughter and son-in-law Diane and Sonny LaPointe, granddaughter Michelle LaPointe, and great-grandson Sullivan James. Viewing and services will be held Friday, October 11th at 10am at Rose Hill Funeral Homes, 580 Elm Street, Rocky Hill, Connecticut. Please share online expressions of sympathy, memories, or photo tributes at www.rosehillfuneralhomes.com.

The family of Michael J. Slahtosky created this Life Tributes page to make it easy to share your memories.

Send flowers to the Slahtosky family.