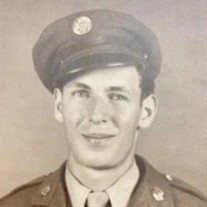 Nicholas F. Diamond, Jr., 92, of Wethersfield, died at Hartford Hospital on Father's Day, Sunday, June 21, 2020 of a broken heart. He struggled the past year trying to live life while grieving the loss of his beloved wife, the late Beverly Johnson Diamond, whom he had married in 1951. Together, they resided in Hartford, where they raised their four children before moving to Wethersfield in 1974. Nicholas, who was better known among family and friends as Frank, was born in Dallas, Texas on March 7, 1928 before moving to Connecticut as a young child. During the height of World War II, Frank wanted to serve his country, but at the age of 16 was not allowed to enlist in the military. Instead, he left school to join the Merchant Marines for two years until he could legally enlist in the US Army at the age of 18. After his honorable discharge in 1947, Frank started toying around with cars and turned it into a lifelong career as an automobile mechanic. He worked at several independently owned garages and automobile dealerships before finishing his career at the Hartford Post Office garage, from which he retired in 1988. Willing to help whenever needed, Frank was always available to repair anyone's car in his wide circle of friends and family. When not working on someone's car, Frank enjoyed watching a NY Yankees or NY Giants game on TV with his sons. Another passion was watching NASCAR racing. No matter where Frank was, the family's pet dog, Teddy, could always be found close by. Frank also owns the distinction of being a 70 year-old member of South Congregational Church in Hartford. Frank leaves behind four children: Leonard Diamond of Rocky Hill, Kathy Watras and husband Thomas of East Granby, Robert T. Diamond of Marlborough, and Edward Diamond of Wethersfield. He also leaves behind five grandchildren: Kristina Diamond, Robert E. Diamond, Kimberly Diamond, Thomas Watras, and Brian Watras. Also left behind is a sister-in-law, Elaine Johnson. Besides his wife, Beverly, Frank was predeceased by a sister-in-law, Shirley Johnson; a daughter-in-law, Susan Diamond; a half-sister, Kay Diamond; and a lifelong buddy, Ray Forbes. Due to the current health crisis, a private graveside service will be held on Friday, June 26, 2020 at Rose Hill Memorial Park, officiated by the Reverend Dr. Jay M. Terbush. In lieu of flowers, donations in Frank's name may be sent to South Congregational Church, 277 Main Street, Hartford, CT 06106. Rose Hill Funeral Home, Inc., 580 Elm Street, Rocky Hill, CT has been entrusted with the care of arrangements.

Nicholas F. Diamond, Jr., 92, of Wethersfield, died at Hartford Hospital on Father's Day, Sunday, June 21, 2020 of a broken heart. He struggled the past year trying to live life while grieving the loss of his beloved wife, the late Beverly Johnson... View Obituary & Service Information

The family of Nicholas Francis Diamond Jr. created this Life Tributes page to make it easy to share your memories.

Send flowers to the Diamond family.