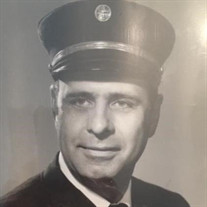 Nicholas D Robson, 93, of Stafford Springs, CT and Barefoot Bay, Florida passed away on May 15, 2019 after a brief illness. Nick was born in Hartford, CT on November 3, 1925 to parents, George and Mae (DePalma) Robson. He graduated from Hartford High School in 1943 and served in the US Army Air Corps during World War II. He had a long career with the Hartford Fire Department, retiring as Captain. Following retirement, Nick served as a deputy sheriff for the Hartford County Court system for ten years.Nick spent a good part of his life involved with fast pitch softball and remained a lifelong fan of the Boston Red Sox. Having spent his winters in Florida, he was active in a variety of interests on the East Coast of Florida. During retirement, he enjoyed a memorable trip to Corleto, Italy, the birthplace of his grandparents and where he met distant relatives.He was active in numerous associations, including the Veterans Fire Association, the Police and Fire Association (past president), the Firemen's Benevolent Society, the Firemen's Protective Association (past president), the Hartford Firefighters Retiree Association, and a life member of BPOE Elks.Nick was predeceased by his parents, son, Nicholas A Robson, brother, George (Chic) Robson, and sister, Marie D Robson. He is survived by two sons, Gary (Rocky Hill, CT) and Steven (Old Saybrook, CT) and two daughters, Gayle (Kenneth) Moule and Janet Cushman (both of Enfield, CT), ten grandchildren and fourteen great grandchildren. A Funeral service will be held on Saturday, June 29 at 11am at Rose Hill Funeral Home, 580 Elm St. in Rocky Hill, CT. There will be a calling hour from 10-11am, just prior to the service. Immediately after service, burial with Military Honors will follow in Rose Hill Memorial Park.

Nicholas D Robson, 93, of Stafford Springs, CT and Barefoot Bay, Florida passed away on May 15, 2019 after a brief illness. Nick was born in Hartford, CT on November 3, 1925 to parents, George and Mae (DePalma) Robson. He graduated from Hartford... View Obituary & Service Information

The family of Nicholas D. Robson created this Life Tributes page to make it easy to share your memories.

Send flowers to the Robson family.