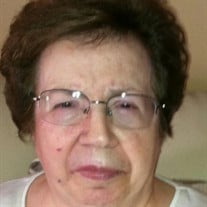 Paolina (Iapichino) Papa, 86, of Wethersfield and formerly of Hartford, passed away on Friday, November 25, 2016 at MapleView Manor. She was the beloved wife of 46 years to the late Giuseppe Papa. Born on February 24, 1930 in Solarino, Sicily, she was the daughter of Giuseppe and Maria (DiMauro) Iapichino. She worked as a seamstress for many years. Before retiring, she helped run the family owned business, Mariella Decor. She was a very loving and devoted mother and spent her life taking care of her daughter, Sebastiana. She was a fantastic cook and her favorite pastime was watching game shows on television. She leaves behind her son, Mauro Papa and his wife Virginia, her daughter, Mariella Morello and husband Joseph, a brother, Francesco Iapichino, sister, Ellie Prestia and husband Charles, devoted sister-in-law, Michelina Iapichino and daughters, 7 grandchildren, Joseph Papa, Thomas Papa and wife Melissa, Paola Papa, Sandra Casner and husband George, Daniella Wilde and husband Alex, Kristina Morello, and Melissa Morello, 9 great grandchildren, George, Rebecca, Anthony, Giovanni, Adriana, Noah, Grace, Isabella and Giuliana. She was predeceased by her daughter, Sebastiana Papa and a brother, Anthony Iapichino, two sisters, Maria Iapichino and Giuseppina Spinoso. The family would like to give many thanks to the staff at MapleView Manor for their care and compassion given to Paolina. The funeral service will be held on Tuesday, November 29 at 9:00am at the Rose Hill Funeral Home, 580 Elm St, Rocky Hill, followed by a Mass of Christian Burial at Corpus Christi Church, 601 Silas Deane Hwy, Wethersfield at 10am. Burial will follow in Rose Hill Memorial Park. Calling hours will be Monday from 5-8pm at the funeral home.

Paolina (Iapichino) Papa, 86, of Wethersfield and formerly of Hartford, passed away on Friday, November 25, 2016 at MapleView Manor. She was the beloved wife of 46 years to the late Giuseppe Papa. Born on February 24, 1930 in Solarino, Sicily,... View Obituary & Service Information

The family of Paolina Papa created this Life Tributes page to make it easy to share your memories.

Paolina (Iapichino) Papa, 86, of Wethersfield and formerly of...

Send flowers to the Papa family.