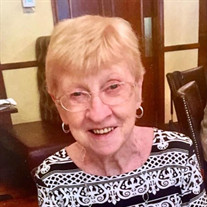 Patricia (Coleman) Ouellette, 84, of Rocky Hill, beloved wife for 59 years to Robert Ouellette, passed away on Monday (December 20, 2021) at her home. She was born in Hartford, on August 22, 1937, a daughter of the late Michael Edward and Kathleen (Donlon) Coleman. Patricia started her career as a secretary at Whitlock Manufacturing. She opened a home daycare which she ran for over 10 years. In later years she worked as a receptionist at Elm Hill Nursing Home in Rocky Hill. She enjoyed traveling through Ireland and connecting to her Irish roots. Patricia was a devoted wife, a loving mother and a doting grandmother. Her greatest joy was spending time with her children and grandchildren. She leaves behind a son, Rob Ouellette Jr. of Wethersfield; two daughters, Kimberly Tsanotelis and her husband Jason of Milton, MA, Holly Hunt and her husband Peter of Milton, MA; three sisters, Maureen Tosti of Hartford, Kathleen Palaia and her husband Salvatore of Farmington, and Rosalind Proulx of Farmington; eight grandchildren, Christopher, Michael, Alexandra, and Nicholas Tsanotelis, Emily Brennan, Madison, Finn, and Nolan Hunt. She also leaves many nieces and nephews. She was predeceased by two brothers, John Francis "Jack" Coleman and Michael Edward Coleman as well as a brother-in-law Ralph Tosti. A Mass of Christian Burial will be held on Thursday (December 23, 2021) 10 AM in St. Josephine Bakhita Parish at St. James Church, 767 Elm St. Rocky Hill. Burial will follow in Rose Hill Memorial Park, Rocky Hill. Family and friends are invited to call on Wednesday (December 22, 2021) from 6 to 8 PM at the Rose Hill Funeral Home, 580 Elm St. Rocky Hill. In lieu of flowers donations in Patricia's memory may be made to the St. Josephine Bakhita Parish (St. James Church Campus) 767 Elm St. Rocky Hill, CT. 06067 Please share online expressions of sympathy, memories, or photo tributes at www.rosehillfuneralhomes.com.

Patricia (Coleman) Ouellette, 84, of Rocky Hill, beloved wife for 59 years to Robert Ouellette, passed away on Monday (December 20, 2021) at her home. She was born in Hartford, on August 22, 1937, a daughter of the late Michael Edward and Kathleen... View Obituary & Service Information

The family of Patricia C. Ouellette created this Life Tributes page to make it easy to share your memories.

Send flowers to the Ouellette family.