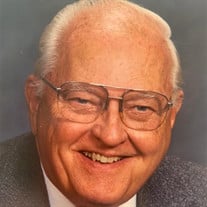 Randall Johnston Toop, 91, of Glastonbury, died Monday June 10, 2019 at Hartford Hospital. Born in Manchester on June 18, 1927, he attended schools there where he met his devoted childhood and life-long friends Cush, Dave, John and Bill. Randall is a WWII veteran where he served in the Navy on the battleship USS Colorado as a radar technician first class. He recently was one of ten surviving members and honored guests to attend the christening of the USS Colorado submarine in Groton. He was a 1951 graduate of the University of Connecticut and was an avid UConn fan. Prior to retiring, Randall had a 40-year career at Chandler Evans in West Hartford. Randall married Lavonn (Hartwig) Toop in 1955 and had 3 children. They spent winters camping and skiing in VT, summers camping and fishing at Laurel Lock Campground on Gardner Lake in Montville, and retired winters in Englewood FL where they met many cherished friends at all of these locations. In Randy’s honor, the flags are raised and it is 5:00 everywhere! He is survived by a son David Toop and his wife Deborah of Manchester, his daughter Janet Rossini and husband Mark with grandsons Eric and Brian of Somers, and daughter Karen Goyette and husband John with granddaughters Avery of Cromwell and Nicole (Goyette) Fusco of Ashford. Randall was also blessed to have his best friend and traveling partner Ellen by his side for 23 years. He is also survived by his sister-in-law Gerry Toop of Salem NH, and several nieces and nephews and extended relatives including Sandy, Pam, Cindy, Randy, Dave, James, Riley and Evan. Randall was predeceased by his wife of 40 years Lavonn, his parents W. Randall and Muriel Toop, his brother Oliver Toop, and his brother and sister-in-law Alfred and Joan Hartwig. His final years were spent at The Hearth in Glastonbury where he continued to make new friendships that were very special to him. The family would like to thank the staff of The Hearth and at Hartford Hospital for caring for him. A private burial will be in Rose Hill Memorial Park at the convenience of the family. In lieu of flowers, donations may be made in Randall Toop’s memory to Hartford Hospital, Attn: Philanthropy, 80 Seymour St, PO Box 5037, Hartford, CT 06102-5037 or online at http://giving.hartfordhospital.org. Donations also can be made in Randall’s memory to St. James Church, 2584 Main Street, Glastonbury, CT 06033. Please share online expressions of sympathy, memories or photo tributes at www.rosehillfuneralhomes.com.

The family of Randall Johnston Toop created this Life Tributes page to make it easy to share your memories.

Send flowers to the Toop family.