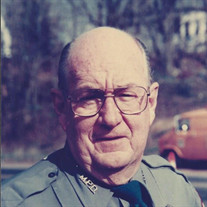 Richard G. Rand, 87, of Manchester passed away peacefully Wednesday, July 5, 2017 at home. Born in Portsmouth, New Hampshire on November 29, 1929. He was predeceased by his wife Sarah (Napoletano) Rand, step-daughter Sandra Longtin and daughter Donna Maloney. He leaves his former wife Norma Dondero, mother to his four children Linda Duncan of Manchester, James Rand of Glastonbury, Melodie Frank and partner Tara Fiducia of Hartford and Deborah Carpenter and husband William of East Hartford. He is survived by his step-son Jeffrey Napoletano and wife Ingrid of Newington and step-daughter Margaret Culbert and husband Gary of Coventry. His 13 grandchildren include Rick, Ben, Toby, Peter, David, Lauren, Lindsay, Frankie, Jennifer, Sarah, Jason, Becky and Ashley. He leaves 12 great-grandchildren. Dick served honorably in the United States Marine Corps from 1948 to 1952. Affectionately known as Randy, he had many ties to the community. He became a Patrol Officer in the Manchester Police Dept. in 1957. He later served as Animal Control Officer until he retired from the force in 1999. Dick gave of his time generously. For over 35 years he was the backstage manager for Betty Jane Turner’s annual dance recitals. He also volunteered for the St. Bridget’s carnival for many years. The family would like to acknowledge the loving care Jeff and Ingrid gave Dick selflessly for the last four years. Burial will be private. Donations in Dick’s memory may be made to the Connecticut Humane Society, 701 Russell Rd., Newington, CT 06111. To send online condolences please visit rosehillfuneralhomes.com.

The family of Richard Rand created this Life Tributes page to make it easy to share your memories.

Send flowers to the Rand family.