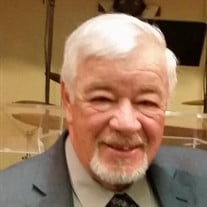 Robert Wesley “Bob” Norton, at the age of 72, passed over to the other side on early Sunday morning, the ninth of September 2018 into the presence of His Lord and Savior Jesus Christ at the Heroes Harbor Hospice Care Center at the VA Hospital in West Haven, CT. after a twelve-year battle with many cancers as a result of agent orange. Bob is survived by his wife of forty years Virginia “Ginny”; first daughter Heather, son-in-law Mike, grandchildren Holly and Jacob; second daughter Heidi and son-in-law Mark, grandchildren Nicholas, Kayla and Camden, all from Massachusetts. His brother Steven and Paule, his nieces and nephews April, Jill and James. His extended family of in-laws Evangeline and Hank LaVertue, Gilbert Charles and Diane Stockson, Gary and Jan Stockson; and his many nieces and nephews. Bob was raised in a family dairy farm in Albion, Maine, graduating from Besse High School in 1964. He began college, but then was called to service to serve in the U.S. Army and was deployed in Vietnam. He proudly served in the call of his country. His career of choice was in fields of construction, especially commercial, whether woodworking, master carpentry, and residential. Finally, he proudly worked for over twenty years as a construction superintendent in KBE Construction, building treasured friendships and comradery in the construction industry. He lived his life as a follower and servant of Jesus, serving and working out his faith at New Hope at Calvary Church (formerly, Calvary Christian Center) of New Britain for thirty years as a leader and deacon. The Funeral service will be held on Saturday September 15 at Rose Hill Funeral Home at 580 Elm St in Rocky Hill. Calling hours from 10am to 11 am. Funeral service from 11am to 12:00 with military honors. A bereavement luncheon will follow at Elizabeth’s at 820 Cromwell Ave in Rocky Hill. In lieu of flowers donations can be to New Hope at Calvary Church, W. Main St., New Britain, Ct. or the VA hospice care center,Heroes Harbor, 950 Campbell Ave., W. Haven, Ct. 06516.

Robert Wesley &#8220;Bob&#8221; Norton, at the age of 72, passed over to the other side on early Sunday morning, the ninth of September 2018 into the presence of His Lord and Savior Jesus Christ at the Heroes Harbor Hospice Care Center at the... View Obituary & Service Information

The family of Robert Wesley Norton created this Life Tributes page to make it easy to share your memories.

Send flowers to the Norton family.