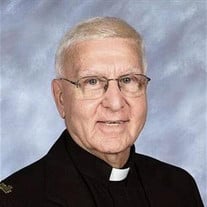 Rev. Robert Thomas Russo, 91, passed away on Sunday, (October 28, 2018) at St. Francis Hospital. He was born in Hartford, CT. on October 4, 1927 a son of the late Joseph and Mary (Tenore) Russo. Fr. Russo graduated from Bulkeley High School in Hartford; Hartt School of Music, West Hartford; The Catholic University of America, Washington, where he also studied philosophy in preparation for seminary. He studied Theology at the Pontifical Gregorian University in Rome, Italy. He was ordained a priest by Cardinal Louis Treglia on June 29, 1961 in Rome, Italy. Fr. Russo served for many years with the Congregation of the Holy Spirit. His priestly assignments in the Hartford area included, Temporary Assistant Pastor, St. Isaac Jogues, in East Hartford, October 1983; Co-Pastor at St. Bridget in Manchester, May 20, 1986 through 1990; on February 9, 1988 he was Incardinated into the Archdiocese of Hartford; He became Pastor of St. Philip Church at Warehouse Point, East Windsor in April 1990 until his retirement in 1999. He resided in the Archbishop Cronin Residence at the Pastoral Center of the Archdiocese of Hartford in Bloomfield, where he lived with several of his brother priests. In January of 2012 he was appointed Director of the Mission Office for the Archdiocese of Hartford. Fr. Russo was an energetic senior priest. He kept a very busy ministry and social schedule and his loss will be felt by many, including his many parishes where he was a regular daily and weekend Mass celebrant. Even in his retirement he served as temporary administrator at St. Philip in East Windsor and St. Catherine of Siena in Broad Brook. Fr. Robert Russo also served in Korea in the US Army, receiving a Good Conduct Medal; Bronze Star and a Medal of Appreciation from the Korean Government. He was an avid tennis player, had a passion for music, singing (especially opera and Neapolitan songs), and was an accomplished pianist and composer. Fr. Russo leaves behind his sister, Armida R. (Russo) Riley of Niantic; his nieces and nephews, Marie Russell of Niantic, Robert and Rosemarie Russell of Waterford, Carol Russo of San Juan Capistrano, CA., Francis Russo, Joseph Russo and Debbie Russo. He also leaves many great nieces and nephews. He was predeceased by two brothers, Frank Russo and Angelo Russo; a sister Phyllis Russell; and a niece, Karen R. Veinot. A Mass of Christian Burial will be held on Friday (November 2, 2018) at 11 AM in St. Gabriel Church, 379 Broad St. Windsor. Calling hours will be held from 9:30 to 11 AM at the church. Burial will be in Rose Hill Memorial Park, Rocky Hill. Rose Hill Funeral Home has care of arrangements. For online guestbook, please visit www.rosehillfuneralhomes.com.

The family of Rev Robert Thomas Russo created this Life Tributes page to make it easy to share your memories.

Send flowers to the Russo family.